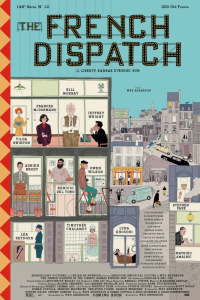 Continuing the countdown of my favorite 2021 movies…

I understand why a lot of people have trouble engaging with Wes Anderson’s films. The fast pace, obsessive attention to detail, overly formal camerawork, deadpan dialogue, all of it. I get it.

But I am happily immune from that aversion. On the contrary, I soak up every fastidious minute of his movies with rapturous glee.

And so, when Anderson releases a movie in The French Dispatch that fans and detractors alike describe as “the most Wes Anderson film yet,” you can bet your ass I’m onboard.

The attention and care with which Anderson and his collaborators approach every scene is evident. I’ve watched The French Dispatch four times now, and each viewing reveals some new joke or visual treat.

I stress the word “collaborators” because, while Anderson’s films might feel like they spring fully formed from his feverish imagination, the reading I’ve done on his process reveals his films are very much a community effort. That camaraderie helps ensure that, no matter how brainy and quirky the movie, it is always, ultimately, warm.

The French Dispatch is a paean to The New Yorker, and is structured like an issue of the titular New Yorker-like magazine, with brief opening and closing sections bookending three longer stories. The anthology format doesn’t allow Anderson the time to burrow into his characters the way he normally does, but he still manages to serve up a memorable lineup.

Best in show among a cavalcade of regulars are newcomers Benicio Del Toro, as a mad (and madly in love) imprisoned painter, and Jeffrey Wright, as a James Baldwin-esque writer caught in the crossfire of a kidnapping plot. Another newcomer, Timothee Chalamet, charms in a middle section about a student rebellion. The connective tissue is Anderson staple Bill Murray as the magazine’s editor, a man who loves his writers above all else.

What ties all these pieces together is Anderson’s own love of the creative process. Characters in this movie create paintings, pottery, a manifesto, a play, magazine articles, cartoons, and food worth dying for. The film has been called a love letter to journalism, but I see it as more of a love letter to artists of all sorts.

The creators in The French Dispatch are lonely, misunderstood, and destined to be forgotten, but they took the time to find beauty and meaning in life, and to express themselves in whatever way they could.

I’ll never complain about the embarrassment of riches in a Wes Anderson film. These days, richness is in short supply.