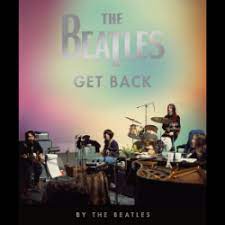 Disney stripped me of my ability to post clips from Peter Jackson’s Beatles documentary Get Back, but today I’ll list a few of the moments I was prepared to feature.

– Paul coming up with ‘Get Back’

This is the most talked-about moment in the series, because it so casually captures the birth of a classic song. Paul, George and Ringo are killing time waiting for John to arrive. Paul starts noodling away on his guitar until he stumbles onto the riff that would become the backbone of ‘Get Back.’

He mumbles nonsense lyrics and is halfway to the melody before long as well. Cut to George and Ringo jumping in and fleshing out the sound, after which John arrives, sits down and joins in on guitar.

It’s a beautiful blend of genius and hard work combining to create something timeless.

While most of The Beatles’ compositions are by Lennon and McCartney, with a smattering of George Harrison tunes thrown in the mix, Ringo Starr did pen two of the band’s releases.

Get Back shows Ringo working through his ‘Octopus’s Garden’ one morning, with George walking over to the piano to help him work through the chords. It’s a lovely moment of friendship and support.

– Paul and John avoiding the intimacy of ‘Two of Us’

‘Two of Us’ is a lovely song written by Paul mostly for his wife, Linda. But some verses were reportedly about the long relationship between Paul and John, who met as teenagers. “You and I have memories
longer than the road that stretches out ahead,” they sing in unison on the finished track.

Get Back reveals that getting to that final version was quite the journey. Throughout the documentary, John and Paul bulldoze through the song’s sentimentality by performing it in funny voices and crazy time signatures. With their relationship crumbling, the song seems too painful for them to tackle head-on.

We finally do see them play it straight, but not until the film’s end credits.

Get Back culminates with the full 45-minute concert staged by The Beatles on the roof of the building housing Apple Studios. As they work through takes of several songs from the sessions, crowds gather below and the police work to shut things down.

I’ve seen footage of this performance before, but the series’ real-time presentation captures every perfectly imperfect moment. In a way it’s an underwhelming culmination of the monthlong rehearsal sessions, especially in light of some of the grandiose ideas thrown around for their final concert. But it shows The Beatles at their best, playing off each other expertly, laughing, and fully embracing the joy and surreality that come with being the most famous band in the world.