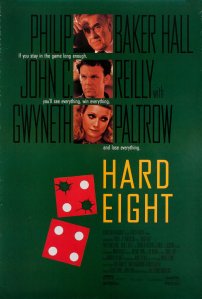 Last month I posted about the filmography of Wes Anderson, one of my favorite filmmakers, in advance of his upcoming movie The French Dispatch.

This month, I turn my attention to another Anderson, and another of my favorite filmmakers — Mr. Paul Thomas Anderson, whose coming-of-age dramedy Licorice Pizza comes to theaters in late November.

Once again, I will write a bit about each film and then offer up my ranked list of Anderson’s films, noting how those rankings have shifted since I last ordered his filmography.

John C. Reilly stars as John, a dimwitted but well-meaning young man whom Sydney takes under his wing. Rounding out the cast are its two biggest stars, Gwyneth Paltrow and Samuel L. Jackson, playing a prostitute cocktail waitress and a security consultant.

Hard Eight is an admirable effort for a debut, and one that hints at the greatness to come, but it’s also rather clumsy at times. Anderson’s talent is most evident in the camerawork and editing, along with his direction of actors, but the script falls short.

This feels like a movie by somebody who loved Reservoir Dogs and Pulp Fiction and wanted to tell his version of that sort of gritty crime drama. But Anderson is a very different filmmaker than Tarantino, one more invested in human messiness than tough guy movie tropes, and he can’t quite pull it off.

Hard Eight does contain an amazing one-scene performance by Philip Seymour Hoffman, in one of his earliest roles. It was the beginning of a creative partnership that would span five films until the actor’s untimely death.