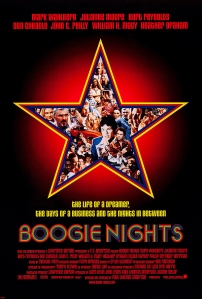 A year after his debut, Paul Thomas Anderson made a major splash with 1997’s Boogie Nights, garnering critical accolades and year-end awards. His trajectory reminds me a lot of that of Wes Anderson, who followed the modest, low-budget Bottle Rocket with Rushmore, one of his most celebrated films.

Boogie Nights is a blast of creative energy so brazen it’s hard to believe Anderson was in his mid-20s when he made it. The sheer number of cinematic techniques on display here is dizzying, and it’s all stitched together with such confidence and bravado.

Chronicling the pornographic movie scene in Los Angeles as the freewheeling 70s give way to the sobering 80s, the film takes most of its cues from Martin Scorsese’s Goodfellas, but with more than a dash of Robert Altman.

Wahlberg and Reynolds, who both later expressed misgivings about the film, turn in career best work here. Reynolds landed his lone Oscar nomination for his work as director Jack Horner. He won the Golden Globe and a host of critics awards. Moore was Oscar nominated as well, as was Anderson for his original screenplay.

The movie holds up splendidly. It’s hard to find a flaw. The switch from the adrenaline rush of the 70s to the hard crash of the 80s is tough, and deflates the movie’s buoyancy, but that’s also when some of the most bravura filmmaking kicks in. It takes some cues from Tarantino in its final third, but never feels derivative.

Anderson’s filmography is interesting in that through his first few films he wears his cinematic influences very much on his sleeve, but finds his own voice in the writing. Over time he would develop his own filmmaking style as well.

Boogie Nights might be derivative of Scorsese, but it feels like its own thing, and it joins Goodfellas as one of the very best films of the 90s.

[Verse 1]
Want some whiskey in your water?
Sugar in your tea?
What’s all these crazy questions you’re askin’ me?
This is the craziest party that could ever be
Don’t turn on the lights cause I don’t wanna see

[Verse 2]
Open up your window, let some air into this room
I think I’m almost chokin’ from the smell of stale perfume
And that cigarette you’re smokin’ ’bout scare me half to death
Open up the window, sucker, let me catch my breath

[Verse 3]
The radio is blastin’, someone’s knockin’ on the door
I’m lookin’ at my girlfriend, she’s passed out on the floor
I seen so many things I ain’t never seen before
I don’t know what it is, I don’t wanna see no more