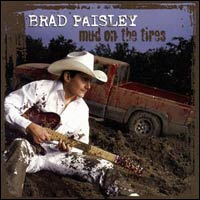 This was the album where Paisley fully embraced his unique oddball persona. He serves up a few earnest love songs, a few traditional country ballads, a few joke songs, and a few complex instrumental tracks, and somehow makes it all fit together in one package so it makes sense.

Mud on the Tires features some of Paisley’s best songs, including the sublime title track, the hilarious ‘Famous People,’ the heartbreaking Alison Krauss duet ‘Whiskey Lullaby’ and the sweetly romantic ‘Little Moments.’ It placed four singles in the Top Five of the Country chart (including a #1 for the title track) and has sold more copies than any of his other albums.

Paisley’s last few albums were so-so. He hasn’t made a great one since 2011’s This is Country Music. But one spin through Mud on the Tires is enough to drive home that he’s a special talent.

[Verse 2]
My good friends come around to hang out now and then
And they joke, man you’ve sure got it hard
With this house on the hill and a white picket fence
And the grass sure is green in the yard