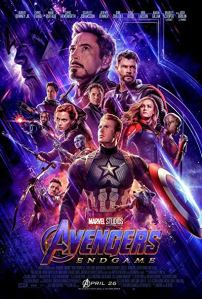 In lieu of today’s Random Weekend selection, and ahead of my top ten movies of the 2010s kicking off tomorrow, I thought I’d offer up a few thoughts on the Marvel Cinematic Universe.

I considered putting one of the Marvel films on my Top 20. I likely would have gone with Avengers: Endgame and used it as a catchall representing the whole 11-year achievement. I decided not to get cute with just one slot on the list when the rest was honoring individual films. And none of the individual Marvel movies placed in my top five in a given year.

That said, it’s hard to ignore what producer Kevin Feige and the MCU team pulled off, releasing 23 interconnected films over 11 years, almost all of them critical and commercial successes.

Phase Three, in particular, which runs from 2016’s Captain America: Civil War through last summer’s Spider-Man: Far From Home, has been a triumph in popular filmmaking.

That stretch includes my three favorite Marvel films (Taika Waititi’s Thor: Ragnarok, Ryan Coogler’s Black Panther, and the Russo Brothers’ Avengers: Endgame), the first two splendid examples of how talented auteurs can put their unique stamp on franchise property, and the third an alternately somber and thrilling culmination of the whole enterprise.

It also includes the Spider-Man films Homecoming and Far From Home, which introduced the best incarnation of the character yet in Tom Holland. And in Captain Marvel, we were given the first female lead in the MCU and a fun 90s time capsule to boot.

Martin Scorsese famously dismissed the MCU films as “not cinema,” though his argument turned out to be more against the proliferation of franchise movies on the big screen, and subsequent crowding out of smaller movies, than it was about the movies themselves (movies he admits he hasn’t even seen).

Having watched all 23 films, and ready to line up for Black Widow in May, I know I can defend quite a few of them as cinema. They are transporting, funny, exciting, sometimes sad. I’ve seen them capture the imagination of my younger daughter in the same way the Indiana Jones and Star Wars films did for me at her age.

I share Scorsese’s concern about non-franchise films getting pushed from big screens to small. I’m encouraged to see movies such as Knives Out, Once Upon a Time in Hollywood, Parasite and Little Women hitting it big at the box office just last year. I also enjoyed Marriage Story and Scorsese’s own The Irishman on Netflix, and I realize that will likely be how I discover more and more films going forward.

But I don’t believe it’s fair to pin that trend on one franchise, especially one as creative and carefully curated as this one. The upcoming Phase Four of the MCU includes movies by directors Chloé Zhao and Destin Daniel Cretton, two celebrated independent filmmakers. We will see gay and transgender characters in billion dollar franchise films, and more representation for Black and Asian actors.

And if the last 11 years are any indication, those movies will be thoughtful, exciting, and a whole lot of fun.

Maybe that’s not “cinema,” but it’s a pretty good way to spend a few popcorn-fueled hours with my family on a Friday night.

[Chorus]
Ahh! Ahh!
We come from the land of the ice and snow
From the midnight sun where the hot springs flow

[Verse 1]
The hammer of the gods
Will drive our ships to new lands
To fight the horde, sing and cry
Valhalla, I am coming

[Chorus]
Ahh! Ahh!
We come from the land of the ice and snow
From the midnight sun where the hot springs flow