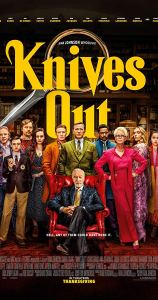 It’s tough to consider the most recent year when compiling a ‘best of the decade’ list. The films both benefit from being freshest in your mind and suffer from not having enough time to really sink in.

I’ve read a couple of decade recaps that set aside 2019 altogether for that reason, which I find silly. How can you assess a movie decade while looking at just nine years’ worth of films?

Another alternative would be to hold off on creating this list until 6 months or a year from now, when 2019 has the benefit of a little more hindsight. But I’m not that patient.

So 2019 is fair game, for better or worse. And that’s a good thing, because it’s been one of the best movie years of the past decade. Just as 1999 is looked back on as the crowning film year of the 90s, I believe 2019 will earn a similar reputation.

Which brings me to Rian Johnson’s Knives Out, an old-school whodunit with a very present-day twist. I was excited for this movie based on the writer-director and the cast, but I ended up loving it even more than I had hoped.

Somebody made the brilliant choice to keep actress Ana de Armas’s role almost entirely out of the film’s marketing. It turns out her character is the main protagonist, and the audience is surprised by both the movie’s perspective and a wonderful performance by a new talent.

De Armas plays the kindhearted, resourceful underdog facing off against a pit of vipers. Politics play a big role in the film, particularly immigration policy, but the bad guys sit on both the left and the right. Johnson’s film is an antidote to the Trump presidency — not so much on the issues but by advocating the importance of basic decency.

Though Knives Out is operating from the Agatha Christie playbook, Johnson tweaks the formula in exciting ways. He shows the victim’s manner of death right up front. He asks the audience to root against the colorful detective (Daniel Craig, having a ball as the Poirot-inspired Benoit Blanc). He very earnestly maintains he has no tricks up his sleeve until until you actually believe him, then produces a beautiful bouquet out of thin air in the movie’s delicious climax.

Craig and De Armas are the standouts, but the rest of the cast does a lot with limited screen time. Jamie Lee Curtis, Don Johnson, Michael Shannon, and Lakeith Stanfield are all unexpected but pitch-perfect casting choices. Toni Collette, in particular, has a ball chewing scenery as a lifestyle blogger. Chris Evans plays gloriously against Captain America type as a trust fund punk. This movie should win every Best Ensemble award.

Finally, Knives Out does what all great movies do, and sticks the landing. The final shot of this film is one of my favorites not just of 2019 but of the last decade.

[Verse 1]
Wading through the waste, stormy winter
And there’s not a friend to help you through
Trying to stop the waves behind your eyeballs
Drop your reds, drop your greens and blues