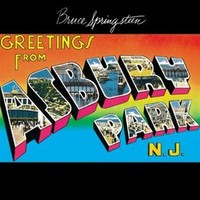 Last week I featured a song from Bruce Springsteen’s 1973 album The Wild, the Innocent and the E-Street Shuffle. That classic album was Bruce’s sophomore effort, and amazingly he had released his debut the very same year.

In January of 1973, Springsteen hit the scene with Greetings From Asbury Park, NJ, an ambitious collection of wordy Dylan-esque folk songs sped up and set to a beat. Right out of the gate, Springsteen cast himself as a sensitive poet for working class dreamers, a mantle he would carry for more than five decades.

Not every song on this album is memorable. Some meander, some fall short in the melody department. For my money, the three best tracks are the three best known: ‘Blinded By the Light,’ ‘Growing Up’ and ‘Spirit in the Night.’ Interestingly, both ‘Blinded By the Light’ and ‘Spirit in the Night’ were written and recorded after Columbia’s Clive Davis said he didn’t hear a single on the album’s first draft.

Springsteen didn’t score hits with either song, but Manfred Mann’s Earth Band did, taking their covers of ‘Blinded By the Light’ to #1 and ‘Spirit in the Night’ to #40.

No accounting for taste.

[Verse 2]
Well now Wild young Billy was a crazy cat and he shook some dust out of his coonskin cap
He said, “Try some of this it’ll show you where you’re at, or at least it’ll help you really feel it”
By the time we made it up to Greasy Lake I had my head out the window and Janey’s fingers were in the cake
I think I really dug her cause I was too loose to fake
I said, “I’m hurt,” she said, “Honey, let me heal it”
And we danced all night to a soul fairy band
And she kissed me just right like only a lonely angel can

[Verse 3]
Now the night was bright and the stars threw light on Billy and Davy
Dancin’ in the moonlight
They were down near the water in a stone mud fight
Killer Joe gone passed out on the lawn
Well now Hazy Davy got really hurt, he ran into the lake in just his socks and a shirt
Me and Crazy Janey was makin’ love in the dirt singin’ our birthday songs
Janey said it was time to go
So we closed our eyes and said goodbye to gypsy angel row, felt so right