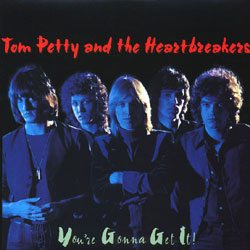 Tom Petty and the Heartbreakers’ sophomore album, You’re Gonna Get It!, was released in 1978, between the band’s 1976 debut album and 1979’s classic Damn the Torpedoes.

As such, it suffers a bit from middle child syndrome, and was received rather tepidly by critics. It produced two singles, ‘Listen to Her Heart‘ and ‘I Need to Know.’

Today’s track, ‘Restless,’ would have made a fine single itself. I like it better than either of the actual singles. Great sound, great vocal. The man is sorely missed.

And pretty baby I’m restless, restless
Restless through and through
I’m restless restless
You look restless too