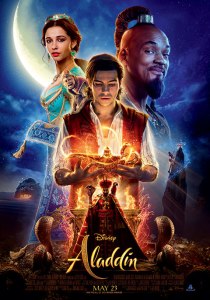 I expected to really dislike Aladdin, director Guy Ritchie’s remake of the 1992 Disney animated classic. Advance word was toxic, glimpses of Will Smith’s genie had been met with the wrong kind of laughter across the web, and the Rotten Tomatoes score settled in at a discouraging 56%.

On the other hand, the film opened to a surprising $113 million over Memorial Day weekend and enjoys a 94% Audience score in contrast to its rotten tomato. So the movie is reaching fans, critics be damned. Which doesn’t always bode well for quality, but can make for interesting viewing.

Well, put me with Team Audience in this case. I had a great time at Aladdin. As these Disney remakes go, I’d rank it below Cinderella and The Jungle Book but a little higher than Beauty and the Beast. It does an admirable job of recreating the spirit of the original while updating certain elements for modern audiences (it still doesn’t pass the Bechdel Test, but Jasmine has a much better arc and her own song — and she doesn’t spend any time as a G-rated sex slave this time around).

The chief complaint about these films is that they have little reason to exist aside from making Disney boatloads of money. And I totally see that point. The movies would be more interesting if the filmmakers brought a new perspective to the material. For that reason, I’m excited to see Niki Caro’s take on Mulan, which is said to be darker than the original (and a non-musical to boot).

Ritchie, on the other hand, is content to recreate the original film, often line for line and shot for shot. It makes for a nifty nostalgic trip but it also makes this film something akin to bonus material on a DVD release of the 1992 film. That said, I have always enjoyed the game of mentally casting real-life actors in these iconic animated roles and it’s neat to see that exercise played out with a big budget.

Will Smith does a fine job stepping into Robin Williams’ massive shoes as the Genie. He doesn’t attempt a Robin Williams impression but makes the character his own. While the original Genie was bound by Williams’ unique brand of humor (I doubt impressions of Jack Nicholson and Ed Sullivan were in the script), Smith gives his version nuances that make him more of a character and less of a stand-up routine committed to ink.

Mena Massoud channels the impish charm of the animated Aladdin, and shows some excellent comic chops in some unexpectedly hilarious scenes (I’ve never laughed so hard at a jam joke).

The true scene-stealer here, though, is Naomi Scott as Jasmine. I will confess a lifelong crush on the animated Jasmine, and Scott does the role justice. She embodies both the impossible beauty and fierce independence of the beloved Disney heroine. Her song (today’s SOTD) is a well-placed ‘Let it Go’-esque addition to the original lineup.

Ritchie’s direction is fine, though his decision to pump up the light and the color (to match the original’s bright animation, I suppose) has the effect of making Agrabah look like a new addition to Disney World rather than an actual city. You never forget these set pieces are taking place on actual sets.

One lovely exception is his staging of the film’s centerpiece scene, the magic carpet ride set to ‘A Whole New World.’ In that moment, the film approaches the romantic abandon and visual grandeur of the original.

Here comes a wave meant to wash me away
A tide that is taking me under
Swallowing sand, left with nothing to say
My voice drowned out in the thunder

Written in stone, every rule, every word
Centuries old and unbending
Stay in your place, better seen and not heard
Well, now that story’s ending

‘Cause I, I cannot start to crumble
So come on and try
Try to shut me and cut me down

I won’t be silenced
You can’t keep me quiet
Won’t tremble when you try it
All I know is I won’t go speechless
Speechless!

Let the storm in
I cannot be broken
No, I won’t live unspoken
‘Cause I know that I won’t go speechless