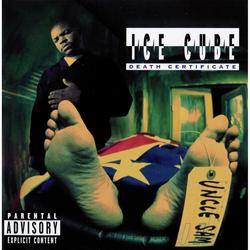 Ice Cube had an ugly break-up with N.W.A. in 1989, followed by his well-received solo debut, AmeriKKKa’s Most Wanted in 1990. A year later, his Death Certificate dropped to even better reviews.

The release also generated a lot of controversy, with Ice Cube’s lyrics (deservedly) called out as misogynistic, racist, anti-Semitic and homophobic. Let’s just say the Oscars won’t be tapping him to host anytime soon.

It’s odd to look back at this period in Ice Cube’s career given his eventual move into film acting, most successfully in family-friendly films like Are We There Yet? and Barbershop. I wonder if an artist with his past could make a similar career shift these days without facing a Twitter army.

[Verse 1]
I wanna kill him, cause he tried to play me like the trick
But you see, I’m the wrong nigga to fuck with
I got the A to the motherfuckin K, and it’s ready to rip
Slapped in my banana clip
And I’m lookin’
Is he in Watts, Oakland, Philly or Brooklyn?
It seems like he got the whole country behind him
So it’s sort of hard to find him
But when I do, gotta put my gat in his mouth
Pump seventeen rounds make his brains hang out
Cause the shit he did was uncalled for
Tried to fuck a brother up the ass like a small whore
And that shit ain’t fly
So now I’m settin up, the ultimate drive-by
And when you hear this shit
It make the world say “DAMN!”, “I wanna kill Sam.”

[Verse Two]
Here’s why I wanna kill the punk
Cause he tried to take a motherfuckin’ chunk of the funk
He came to my house, I let ’em bail in
Cause he said he was down with the LM
He gave up a little dap
Then turned around, and pulled out a gat
I knew it was a caper
I said, “Please don’t kill my mother”, so he raped her
Tied me up, took me outside
And I was thrown in a big truck
And it was packed like sardines
Full of niggas, who fell for the same scheme
Took us to a place and made us work
All day and we couldn’t have shit to say
Broke up the families forever
And to this day black folks can’t stick together
And it’s odd
Broke us down, made us pray – to his God
And when I think about it
It make me say “DAMN! …I wanna kill Sam.”

[Verse Three]
Now in ninety one, he wanna tax me
I remember, the son of a bitch used to axe me
And hang me by a rope till my neck snapped
Now the sneaky motherfucker wanna ban rap
And put me under dirt or concrete
But God, can see through a white sheet
Cause you the devil in drag
You can burn your cross well I’ll burn your flag
Try to give me the HIV
So I can stop makin babies like me
And you’re givin’ dope to my people chump
Just wait till we get over that hump
Cause yo’ ass is grass cause I’ma blast
Can’t bury rap, like you buried jazz
Cause we stopped bein’ whores, stop doin’ floors
So bitch you can fight your own wars
So if you see a man in red white and blue
Gettin’ chased by the Lench Mob crew
It’s a man who deserves to buckle
I wanna kill Sam cause he ain’t my motherfuckin Uncle!