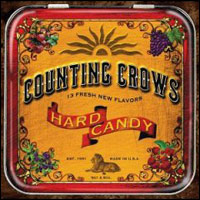 My choice for Counting Crows’ best album is a close contest between their 1993 debut August and Everything After and their fourth release, 2002’s Hard Candy. Forced to choose, I would likely side with Hard Candy.

Today’s random SOTD, ‘Carriage,’ is a big reason why. This is a beautiful and poignant song that plays to Adam Duritz’s strengths as a lyricist and vocalist and gives the band plenty of space to fill a rather sparse song with moments of musical grace.

As Duritz has explained in concert, ‘Carriage’ is about a time when a former girlfriend of his became unexpectedly pregnant. They debated whether she should have an abortion but ultimately decided to have the baby. Then she miscarried.

He sadly references “another world of chocolate bars and baseball cards” that he would have shared with his unborn child, but he knows that ultimately this was her choice, and her loss. At least that’s how I read the “it’s all inside of you” lines.

[Verse 1]
If anything, it should have been a better thing
From underneath you staring at the ceiling
There’s another world of chocolate bars and baseball cards
That hides inside of all this tension that I’m feeling

[Verse 2]
Surprise, surprise, you miss your hair, you miss my eyes, and all
This solitude, is my confidence eroding?
So we slide inside of someone’s mouth and someone’s eyes until
There’s sound of something intimate exploding

[Verse 3]
I wish that I was anesthetized and sterilized and then
We wouldn’t have this evidence congealing
Surprise, surprise, another pair of lips and eyes
And that is the consequence of actually feeling