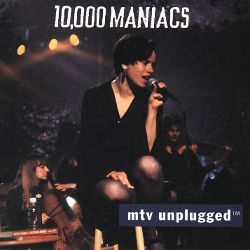 Over the past couple of weeks, I’ve mostly featured MTV Unplugged performances that were milestones of one sort or another. Today I’m closing out the series with a performance that’s notable only because it’s a beautiful performance of one of my favorite songs.

10,000 Maniacs was a big enough deal in the early 90s to score two Unplugged appearances within a few years. The band appeared on the third-ever show (along with Michael Penn) in 1989 and returned for this performance in 1993, with special guest David Byrne.

It’s easy to forget about this band because they split up not long after they hit the mainstream. The band performed and recorded through most of the 80s with minimal success before 1987’s hit In My Tribe, but lead singer Natalie Merchant left to pursue a solo career just five years later after the excellent Our Time in Eden. They continued to record without her (to this day, in fact, with a couple of pauses) but absent Merchant’s enchanting vocals and charismatic presence, they received little attention.

In My Tribe and Our Time in Eden remain two of the best albums of the alternative rock era. The former is a folk-rock catalog of societal issues, from illiteracy and gun control to domestic violence and alcoholism. But fun! The latter is a richer affair, musically, and more concerned with matters of the heart.

Today’s performance was recorded just a few months before Merchant announced her departure from the band, and was released as a live album after she left. It’s probably telling that they were introduced as “Natalie and 10,000 Maniacs.”

[Verse 1:]
You win a prize for that
For telling lies like that
So well that i believed it
I never felt cheated
You were the chosen one
The pure eyes of noah’s dove
Choir boys and angels
Stole your lips and your halo

[Verse 2:]
In that august breeze
Of those forgotten trees
Your time was set for leaving
Come a colder season

[Verse 3:]
Very… So very wise
Don’t reveal it
I’m tired of knowing
Where it is you’re going