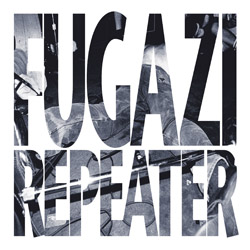 After a brief detour through delightful jangle pop territory, 1990 brings back the noise with Fugazi’s Repeater.

The Washington, D.C-based band is described as “post-hardcore,” which basically mean hardcore punk with a little more thought put in. It still sounds like a whole lot of screaming and thrashing to me. I wonder about the mental and emotional state of somebody who finds comfort or release in music like this.

Repeater, Fugazi’s debut album, has been cited as an influence on some of the seminal 90s albums that followed, including Nirvana’s Nevermind and Pearl Jam’s Ten. I guess that makes grunge post-post-hardcore.

You say I need a job, I’ve got my own business you want to know what I do?
None of your fucking business
But now i’m lying here knowing that business I had a name, but now I’m a number

Down by law, I’ve got this nasty habit
When I need something I just reach out and grab it
Once upon a time I had a name and a way
But to you I’m nothing but a number

Did you hear something outside?
It sounded like a gun
Stay away from that window, boy
It’s not anyone we know only about ourselves and
What we read in the paper
Don’t you know ink washes out
Easier than blood
But we don’t have to try it
And we don’t have to buy it