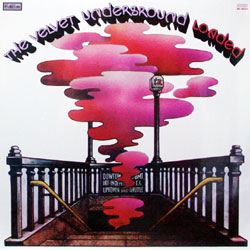 Last week I counted down my five favorite albums of 1970, and while it was an excellent group of albums, the truth is I didn’t have many runners-up. I have a very cursory knowledge of that year’s music.

So over the next three weeks I’ll feature songs from other 1970 albums that received widespread acclaim. Could some of these crack my own top five if given the chance?

This week I’ll look at albums that I know at least a little bit. I either have owned or do own each of these five records but I’ve never spent enough time with them to give my honest appraisal.

First up is The Velvet Underground’s Loaded. This was the influential band’s fourth album and their final release with lead singer and principal songwriter Lou Reed. It was also their most commercial record, conceived and recorded expressly with radio play in mind.

The album’s first three tracks are its best known: ‘Who Loves the Sun,’ ‘Sweet Jane’ and ‘Rock and Roll.’ From what I’ve heard of the rest, they’re in the same vein but not as iconic. Of course, you can’t get much more iconic than ‘Sweet Jane.’

Standin’ on a corner
Suitcase in my hand
Jack’s in his corset, Jane is in her vest
And me I’m in a rock ‘n’ roll band. Huh
Riding a Stutz Bear Cat, Jim
Ya know, those were different times
All the poets studied rules of verse
And those ladies they rolled their eyes

Now Jack, he is a banker
And Jane, she’s a clerk
And both of them save their monies
When they get home from work
Sittin’ down by the fire
Ooo, the radio does play
The classical music there, Jim
The March of the Wooden Soldiers
All you protest kids
You can hear Jack say

Some people they like to go out dancin’
And other people they have to work. Just watch me now
And there’s even some evil mothers
Well they’re gonna tell you that everything is just dirt
You know that women never really faint
And that villians always blink their eyes
That children are the only ones who blush
And that life is just to die