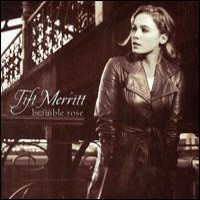 Tift Merritt’s 2002 debut, Bramble Rose, is another album I discovered well after its release. I heard the singer-songwriter’s 2004 sophomore album, Tambourine, first.

Bramble Rose is one of two autographed albums in my collection. The other is also by Merritt, 2012’s Traveling Alone. I guess you could say she and I are tight.

I bought Bramble Rose and had it signed at an Elvis Costello concert for which Merritt was the opening act and first listened to it during my drive home from the show.

It’s more country than the Muscle Shoals-inspired Tambourine, but no less soulful. Merritt’s sensitivity and facility with a melody were already on display in this debut effort.

It took me about three songs to realize that Merritt was going to be a favorite of mine for a long time.

Don’t you know that the angels, in some wild and secret heart
Doubt for those who get the wrong things
And those who want to get caught
You don’t have to doubt no more
You don’t have to count on cryin’
No one can win a heart like yours
But damned if he ain’t tryin’

There is no rain comes down, you don’t carry in your hand
For whoever gets the wrong things right
Since no one understands
There is no flower I know
Deserving of your hair
But damned if he don’t come every night
To try and pin one there