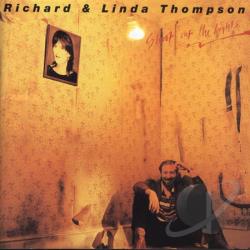 In contrast to the first two albums featured this week, which I knew by reputation and their hits but didn’t own, today’s record is one I’ve owned for quite awhile but have never heard.

I first learned about Shoot Out the Lights (and Richard and Linda Thompson) when Rolling Stone named this record the 9th best of the 80s in their decade wrap-up issue. Sitting alongside albums by Prince, R.E.M., Bruce Springsteen, Paul Simon and U2, this folk rock album by a married British couple seemed entirely out of place.

But my curiosity was piqued so I bought the album sometime in the early 90s.

However, the CD I purchased, while labelled as Shoot Out the Lights, actually contained the entirety of David Bowie’s The Rise and Fall of Ziggy Stardust and Spiders From Mars. At the time I hoped I’d stumbled upon some one-in-a-million mistake — like that stamp with the upside-down plane — and would turn my find into a small fortune.

I have Googled “Ziggy Stardust and Shoot Out the Lights” every few years but I’ve never found a mention online of a similar find. So either it’s so mundane as to warrant no discussion, or it is truly the only example in existence and maybe I should be seeking out a rare record collector rather than writing this blog.

At any rate, years later I found a copy of Shoot Out the Lights at a used CD store and bought it again — getting the real album this time. I’ve just never taken the time to give it a good listen.

The album was recorded while the Thompsons were married but they had split up before its release. While the songs were mostly written before their marital troubles began, most critics read the record as a raw portrait of a disintegrating marriage.