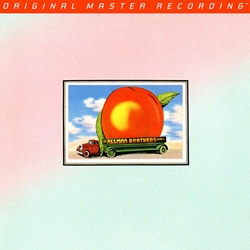 Eat a Peach, released in February of 1972, was the third album by The Allman Brothers Band and the last one to feature guitarist Duane Allman, who died in a motorcycle accident in October of ’71 at the age of 24.

Much of the album was written following Duane’s death as a tribute to him, but the double album also included tracks recorded before his death both live and in the studio. Two full sides of Eat a Peach contained a 34-minute jam (titled ‘Mountain Jam’) that would presumably try even a true fan’s patience.

The album’s best-known track is ‘Melissa,’ which was written by Gregg Allman before the band even formed. The track was always a favorite of Duane’s and Gregg recorded it in memory of his brother. He’d always considered the track “too soft” for the Allman Brothers Band, but it went on to become one of their most enduring classics.

Crossroads
Seem to come and go, yeah
The Gypsy flies
From coast to coast

Freight train
Each car looks the same, all the same
And no one knows
The gypsy’s name

No one hears his lonely sighs
There are no blankets where he lies
In all his deepest dreams the gypsy flies
With sweet Melissa, mmm

Again the morning’s come
Again he’s on the run
Sunbeams shining through his hair
Appearing not to have a care
Well, pick up your gear
And gypsy roll on, roll on

Crossroads
Will you ever let him go? Lord, Lord
Will you hide the dead man’s ghost
Or will he lie, beneath the clay
Or will his spirit float away?