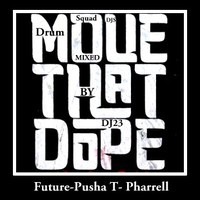 In the 15th spot is Sam Smith’s ‘Stay With Me,’ which should make Tom Petty happy, as he was recently awarded a songwriting credit on the popular track due to its similarity to ‘Won’t Back Down.’

Coming next at #16 is this atrocity from Future. Any song that starts with the phrase “young nigga move that dope” repeated more than a dozen times isn’t a candidate for one of my songs of the year.

It’s odd to see Pharell rapping on this track after watching him for a season of The Voice. Where’s the old softie who tells every amateur singer they’re destined for greatness if they can just discover who they truly are inside?

[Verse 1: Future]
Whippin’ the yam, whippin and flippin’ the yam
Turn the whole brick to a Lam
Re-rockin’ the dope, soon as it get off the boat
Keepin’ it soft like a mink
Gold on my link, coke in the sink
Choppin’ that work like karate
Servin’ a new Maserati, in a brand new Maserati
That’s a whole lot of new money
Snatch it, then hide it from the 12
Movin’ them squares and them bales, servin’ the rawest of yayo
Beating that china like Kunta Kinte
Whippin’ it, whippin’ that fish and Parkay
Drinkin’ on syrup, I’m rollin’ up haze
Made myself a boss, a boss and a plug
Either way you put it, nigga, I’m good
Triple salute, nigga, straight out the hood
Bakin’ soda water splash the scales
Fork in my right and my pot in my left
Leanin’ all the way over to the side, I whip me a four way to a nine
The dirty, the money is homicide and my recipe can’t be televised

[Verse 2: Pusha T]
Young enough to still sell dope, but old enough that I knows better
When they sayin’ it’s 42 for that white powder, I knows better
Get it nigga? I nose better, put a smile on the devil’s face
Who don’t wanna sell dope forever and flood their Rollie ’till the bezel break?
Woo! Fish scale in the two-door that I fish-tails
Fiberglass, Ferrari leather, in designer shit that I misspell
YUGHH! Look at the clues, the J’s, the jewels, I’m actin’ a monkey
From sixteen years old, I’m whippin’ in kitchens, fuckin’ my junkies
Pablo, Versace way before Migos
My dinner plates, no silverware, all you niggas my hijos
Toss a kilo like a free throw, crack house, it had the peephole
Made it through to the other side, now nothing’s big as my ego, Push

[Verse 3: Pharrell]
Me, I try to leave the best for later
But Pusha tried to put me on the respirator
The old Skateboard P, that’s your favorite
Me and twenty girls doin’ yoga naked
Frequency high, like a spaceship
She say that she like it and she’s been exposed
The Gandalf hat and the weird ass clothes
That’s Comme des Garçons and the Buffalo
I know guerrillas with the triggers that’s on a banana clip
And packin’ with the biggest missiles
These niggas is knocking over vehicles
These niggas ain’t waitin’ just to see niggas
These niggas ain’t tryna hear plea niggas
These niggas like choppin’ down trees, niggas
These niggas 1-2-3 and they squeeze, niggas
These niggas hit the weed then they lean niggas, gee, nigga
If you got two hoes, you need to let one go
Two Lambos, you need to let one go
All these drones while y’all smoke dro
There’s an eye in the sky, I’m tryna let y’all know
Ain’t no standards, I’ma set one though
Big ass bag but no man sandals
All that war, we need to let that go
That boom business, I’ma get that ho

[Verse 4: Casino]
Young nigga got that coke, whip that dope like a bad child
How you think about that coupe, with no roof? Young nigga cashed out
Popped so many Percs, popped so many Zans, young nigga ’bout to pass out
12 jump behind me, I got some in the car, young nigga ’bout to smash out
Migo hit that line, say he got some bricks, young fresh, ’bout to buy ’em out
QuikTrip ’round the corner, dropped a nine
Got the J’s in the lunch line smokin’ iron
Cocaine, cocaine cowboy, like Mickey Munday
Take over the project, whip a line, me no wait
I keep a 45 in my coat, while I’m servin’ dope
The J’s in my hood smoke that crack, say it give ’em hope
Serve a nigga whole brick, he hopin’ that it come and go
Young nigga tricked up, now he spendin’ that money with Casino!