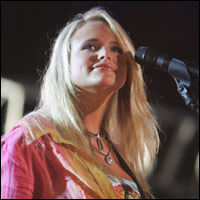 I’ve been listening to Miranda Lambert’s new album, the terrific Platinum, a lot the past couple of months.

Then the other day I decided to fire up her previous album, Four the Record, which is equally terrific. A couple of years back, it was the brand-new collection that dominated my car stereo. But now it’s been pushed aside, like a first wife whose husband left her for a 25 year-old.

Except Four the Record isn’t the first wife — as the title suggests, it’s the fourth.

My first Miranda Lambert love was Crazy Ex-Girlfriend, followed by Kerosene and then Revolution. Kerosene was actually her debut record, but I discovered it after falling for her sophomore effort.

Lambert hasn’t released a bad album yet. She hasn’t even released a less-than-great album yet. But I would rank Crazy Ex-Girlfriend as her finest work. First loves, musically, often remain our favorites.

And yet I haven’t listened to that album all the way through in years. She’s been releasing excellent records every year or so (including her work with Pistol Annies) so her latest work tends to dominate my playlist.

I heard ‘More Like This’ in the car the other day and it was like finding a photograph of your first girlfriend. Actually, that’s a bad analogy. All of these albums are by the same person — you don’t leave one for another. It’s more like each album represents a phase in an evolving relationship.

So I guess it was like finding a photograph of my wife from the year we met. What a wonderful memory. Now it’s time to pull out the album and relive it again.