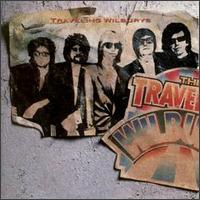 As one YouTube poster commented just a week ago, the Traveling Wilburys were “The Avengers of classic rock.”

George Harrison, Bob Dylan, Tom Petty, Roy Orbison and Jeff Lynne make sense as friends but not necessarily as band mates. Each brings his own distinctive vocal and writing style to the mix… how could they possibly gel?

Just beautifully, as it turns out. Each member gets his turn on lead vocals but they sound best when harmonizing. The recent album that most reminds me of this one is Pistol Annies’ debut — it has the same sense of comfortable fun, and the same almost accidental brilliance.

I have fond memories of listening to this album while shooting pool with my parents in my childhood homes. It’s not every album that can span generations the way this one did. We listened to either a collection of Pavarotti arias or Traveling Wilburys. Talk about running the gamut.

Orbison died shortly after Vol. 1 was released, and though the band recorded a follow-up (amusingly titled Vol. 3), it wasn’t the same. The chemistry had been altered, or perhaps their hearts just weren’t in it. You can only capture lightning in a bottle once, and on this album they certainly did that.

Been beat up and battered ’round
Been sent up, and I’ve been shot down
You’re the best thing that I’ve ever found
Handle me with care

Everybody’s got somebody to lean on
Put your body next to mine, and dream on

I’ve been fobbed off, and I’ve been fooled
I’ve been robbed and ridiculed
In day care centers and night schools
Handle me with care

Been stuck in airports, terrorized
Sent to meetings, hypnotized
Overexposed, commercialized
Handle me with care

Everybody’s got somebody to lean on
Put your body next to mine, and dream on

I’ve been uptight and made a mess
But I’ll clean it up myself, I guess
Oh, the sweet smell of success
Handle me with care