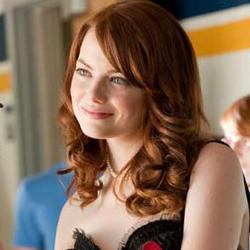 My attention to the Song of the Day series, as well as general laziness, has kept me from honoring my promise to review every movie I see. I find that if a movie is destined for my top ten list I usually review it pretty soon after I see it, but if not, I let it sit. And if it sits long enough, it’s in danger of never being reviewed at all.

So I skimmed the list of 2010 movies I’ve seen in recent months and realized a full ten of them have gone undocumented on Meet Me In Montauk.

To remedy that situation in one fell swoop, I’m going to write capsule reviews of each of them in this post.

So here goes nothing (titles are presented alphabetically):

This Australian crime flick, based on a true story, gained recognition due to Jackie Weaver’s Oscar-nominated performance as the den mother of a clan of sociopaths. Weaver is fine, but she wouldn’t have made my short list of supporting performances.

I’m normally a pushover for crime movies but this one didn’t really grab me. Writer-director David Michod, in his feature length debut, shows a lot of promise but the movie lacks a broad theme — it doesn’t amount to much. And I didn’t care enough about its characters to be invested in their fates.

For some reason I’ve had a hard time staying awake through this film every time I’ve seen it (once in the theater and twice at home). I’m not sure if that a fault of the film’s, of mine, or just a strange coincidence.

Steve Carrell delivers a splendid character performance as Gru, the villain who learns to love three orphan girls during his quest to steal the moon. And his minions, an army of little yellow capsule-shaped Oompa Loompas, are an inspired touch. The offbeat humor and bizarre animation help this film stand out, but it doesn’t live up to the better animated films I saw in 2010.

Wonderful star turn by Emma Stone, who was worthy of a Best Actress nomination. Her Olive is a cross between Juno and Ferris Bueller, smart as a whip, sarcastic as hell, so much cooler than the high school crowd with which she’s doomed to share time. The film is the best modern twist on the John Hughes formula I’ve seen since 10 Things I Hate About You.

How Do You Know

The better a move should be, the more it sucks when it fails to be any good at all. James L. Brooks made one of the best romantic comedies of all time in Broadcast News, but time and every movie he’s made since has proved what a rare gem he delivered back then.

How Do You Know is so poorly conceived that even a charming turn by Paul Rudd (at his most Paul Rudd-y) and the funniest work Owen Wilson has done in some time can’t save it. I’d love to see this cast reassembled to perform an entirely different script. This one is a dog start to finish, with exactly one memorable scene (and it’s between two bit players).

Along with Easy A, the best of the films I’m reviewing here. Never Let Me Go is a science fiction tale about a trio of friends in an English boarding school who were born in test tubes for the sole purpose of donating their organs in their early 20s. In this alternate universe, human life spans average over 100 years because of the ready supply of fresh parts. But do these donor clones have souls?

Carey Mulligan, Keira Knightley and Andrew Garfield play the three friends and sometime lovers who start facing their own mortality before they’re even out of their teens. The performances are wonderful across the board. Escape is never an option here — it’s not that kind of movie, to the consternation of some critics. They accept their fate, as we all must on different scales, and do what they can with what time they have.

This is a deeply sad film but a beautiful one. Its final moments stayed with me for some time.

Pairing up Will Ferrell with Mark Wahlberg was a genius move. The humor in this film is off-kilter and anarchic, not the sort of buddy cop parody I was expecting (which is a good thing). And good lord… Eva Mendes.

A fun comic book adaptation that’s never as fun as I wanted it to be, considering the cast. Bruce Willis does his charming tough guy act, Mary-Louise Parker is his adorably nervous love interest, John Malkovich adds another to his stock of hilarious raving madmen, and Morgan Freeman and Helen Mirren pop in to class up the joint. Given those ingredients, Red is diverting but adds up to less than the sum of its parts. In fact, the aspect of the film that surprised me the most was Karl Urban’s turn as the federal agent who morphs from bad guy to unexpected ally.

Another strong offering from the non-Pixar branch of Disney animation, this film tells the Rapunzel story as comic action adventure. Rapunzel is teamed with Flynn Rider, a charming ne’er-do-well from the Aladdin mold, and they have great cartoon chemistry. While the Pixar films have abandoned the musical format, it’s alive and well here. I didn’t find the songs as memorable as those penned by Randy Newman for the wonderful, New Orleans-based The Princess and the Frog, though.

After Speed, audiences were treated to (or subjected to, in most cases) a dozen movies that could be described as “Speed on a [fill in the blank].” Well, this is Speed on a train, but it works much better than those other wannabes, mostly due to Tony Scott’s whiz-bang direction and the charm of its leads, Denzel Washington and Chris Pine. The tale of this runaway train is “inspired by” a true story, and it had me tracking down the real events on the Web. Many of the more impressive elements were, of course, embellished, and I’m sure the transit director who was portrayed by Rosario Dawson is a very happy woman.

You Will Meet a Tall Dark Stranger

Woody Allen has been churning out a movie a year in five different decades now, and I’m ashamed to admit that I stopped religiously watching them several years back. I think it was the back-to-back disappointments of The Curse of the Jade Scorpion and Hollywood Ending that scared me off. But he also released Match Point and Vicky Cristina Barcelona over the last five years, his two best films since the late 90s, so maybe I’m being hard on him.

I’m glad I caught up with You Will Meet a Tall Dark Stranger, a tale of romantic misadventures set in London (Allen doesn’t work in the U.S. anymore, for financial reasons, I guess). I see (very faint) echoes of Hannah and Her Sisters in this yarn, in which men and women follow their hearts into certain calamity, and the cast (which includes Naomi Watts, Josh Brolin, Freida Pinto, Anthony Hopkins and Antonio Banderas) is among Allen’s most talented, diverse emsembles.

This isn’t a comedy — in fact, some scenarios are played straight when they would have benefited from Allen’s wit — but neither is it one of those leaden dramas Allen released in the late 80s. It’s a very human film, and a nice surprise from Allen. (But Woody, please drop the narration!)