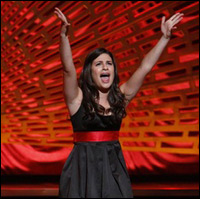 This song is the closest I’ve come on the blog to a repeat. Back in June, guest blogger Amy featured a mashup of this version of the song interwoven with clips of performances by Idina Menzel and Barbra Streisand.

It was a great video that really highlighted the thread that connects those three women across three generations of impressive theatrical vocals. And one third of it was the exact song I’m featuring today.

But I won’t let a little technicality like that get in the way of featuring one of the most memorable performances of Glee‘s first season.

The club turns to Rachel, their star, to bail them out. Asked if she has any good ideas for an opening number, she responds “I do have something I’ve been working on since I was four.” And here it is.

Don’t tell me not to live, just sit and putter
Life’s candy and the sun’s a ball of butter
Don’t bring around a cloud to rain on my parade
Don’t tell me not to fly, I simply got to
If someone takes a spill, it’s me and not you
Who told you you’re allowed to rain on my parade
I’ll march my band out, I’ll beat my drum
And if I’m fanned out, your turn at bat, sir
At least I didn’t fake it, hat, sir
I guess I didn’t make it
But whether I’m the rose of sheer perfection
A freckle on the nose of life’s complexion
The Cinderella or the shine apple of its eye
I gotta fly once, I gotta try once,
Only can die once, right, sir?
Ooh, life is juicy, juicy and you see,
I gotta have my bite, sir.
Get ready for me love, ’cause I’m a “comer”
I simply gotta march, my heart’s a drummer
Don’t bring around the cloud to rain on my parade,

I’m gonna live and live NOW!
Get what I want, I know how!
One roll for the whole shebang!
One throw that bell will go clang,
Eye on the target and wham,
One shot, one gun shot and bam!
Hey, Mr. Arnstein, here I am …

I’ll march my band out, I will beat my drum,
And if I’m fanned out, your turn at bat, sir,
At least I didn’t fake it, hat, sir,
I guess I didn’t make it
Get ready for me love, ’cause I’m a “comer”
I simply gotta march, my heart’s a drummer
Nobody, no, nobody, is gonna rain on my parade!