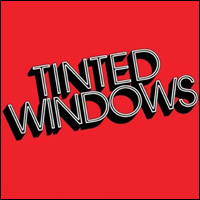 The first new album I bought in 2009 was Tinted Windows’ self-titled debut. These guys were the first of the “supergroups” that were so ubiquitous last year and initially the one I found most promising.

The lead songwriter is Adam Schlesinger of Fountains of Wayne and Taylor Hanson (the talented member of Hanson) handles lead vocals. The Smashing Pumpkins’ James Iha and Cheap Trick’s Bun E. Carlos round out the band but it’s the first two fellows I mentioned who had me excited. Both Fountains of Wayne and Hanson have a knack for power pop and this band promised to be power pop nirvana.

Well, the album is certainly power pop but it’s not quite nirvana. Schlesinger seems to have saved his best material for his day job… most of these songs would have trouble cracking the lineup on a Fountains of Wayne album.

My biggest complaint is with the album’s production. These days, I’m used to just about every CD I buy sounding great even when the music isn’t up to par. But Tinted Windows sounds way too light and tinny… it’s as if the bass levels were inadvertently zeroed out when they hit record.

‘Kind of a Girl’ was the album’s first single and the closest thing to a Fountains of Wayne song on it.

I had some time to kill, I had a lot to learn yeah
She said I heard you got a little money to burn yeah
She said she knew some things to do, some places we could go
The way he looked I guess I kinda couldn’t say no