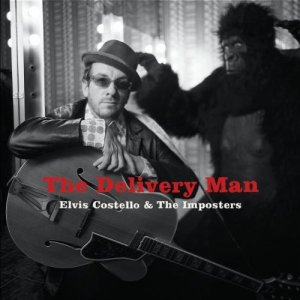 Here’s a lovely track from Elvis Costello’s 2004 album The Delivery Man, which started as a concept album about a quartet of characters in the deep south but ended up as a collection of loosely connected rock songs and ballads.

Ivy was presumably one of the characters in that original narrative, and her presence is felt in the backing vocals of the wonderful Emmylou Harris, who shows up on a couple of tracks. Lucinda Williams sits in on the raucous ‘There’s a Story in Your Voice,’ delivering a wild and passionate performance.

END_OF_DOCUMENT_TOKEN_TO_BE_REPLACED

For the second straight year, my wife’s birthday falls on a Random Weekend day, allowing me to play the old “whatever song comes up is your birthday dedication” game.

Last year the needle landed on the Cirque du Soleil version of The Beatles’ ‘I Am the Walrus.’ Let’s see what 2014 has in store…

END_OF_DOCUMENT_TOKEN_TO_BE_REPLACED

Elvis Costello’s ‘Monkey to Man’ has always rubbed me the wrong way, for a couple of reasons.

The first is that, as the first single from his solid 2004 album The Delivery Man, it’s a poor representation of that record. It’s a bit too lightweight and jokey for an album that is steeped in dark blues and country tunes.

END_OF_DOCUMENT_TOKEN_TO_BE_REPLACED

The Random iTunes Fairy is stealing a bit of my thunder.

I had planned to feature Elvis Costello next week as part of my musical genome project, and perhaps I still might. But today’s song would have been a perfect selection to demonstrate Costello’s ‘Country Plus’ credentials. I’ll table that discussion until the appropriate time.

END_OF_DOCUMENT_TOKEN_TO_BE_REPLACED

Elvis Costello missed a shot at an Oscar nomination for his song ‘God Give Me Strength,’ co-written with Burt Bacharach for the 1996 film Grace of My Heart. That song is a thing of beauty, far superior to the schlock that wound up nominated (though I am a fan of ‘That Thing You Do,’ the Adam Schlesinger-penned title track from that Tom Hanks film).

But the Academy made up for their oversight eight years later by nominating today’s track, ‘The Scarlet Tide,’ which Costello wrote for the film Cold Mountain. He didn’t win (the award went to some forgettable tune from Return of the King, piling on to that film’s sweep) but he did get the chance to perform, with Alison Krauss, in front of one of his largest audiences ever.

END_OF_DOCUMENT_TOKEN_TO_BE_REPLACED

Elvis Costello followed up the disappointing North just a year later, with 2004’s The Delivery Man. And where North felt stilted and mannered, the new album was bursting with energy.

Another of Costello’s half-baked concept albums, The Delivery Man purports to be the story of the title character and his relationships with three different women. Those women are played on the album by Lucinda Williams and Emmylou Harris, each of whom duets on at least one track. The narrative is really quite flimsy, though, as if Costello abandoned the idea midway through recording.

END_OF_DOCUMENT_TOKEN_TO_BE_REPLACED

A year after When I Was Cruel, Costello released the only original album of his that I’ve chosen not to own — a collection of MOR ballads called North. I think I listened to the album twice before coming to terms with the fact that I’d never listen to it again. Even worse than the uninspired Goodbye Cruel World, it’s the only time in Costello’s career that he didn’t even make it out of the gate.

But a year after that debacle came another excellent album, The Delivery Man. Costello has always been a fan of concept albums and this one was conceived as a passion play starring three characters — Abel, Vivian and Geraldine. I think the story got lost somewhere along the line, or maybe these are just the songs that fill in the spaces between the dialogue we don’t get to hear… at any rate, the album doesn’t work as a play, but it definitely works as an album.