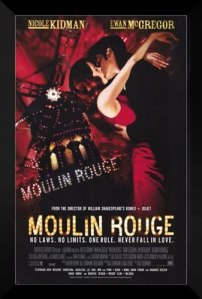 If I were ranking top scenes from these 25 musicals, two standouts from Baz Luhrmann’s 2001 Moulin Rouge may well top that list. One is Ewan McGregor’s earnest performance of Elton John’s ‘Your Song’ and the other is today’s SOTD, the so-called ‘Elephant Medley.’

This extravagant mash-up of a dozen love songs is both a brilliant piece of music and transporting cinema. McGregor leaping on the elephant’s head to belt out “love lifts us up where we belong” and the explosion of heart-shaped stars surrounding the lovers as they break into the chorus of ‘I Will Always Love You’ — these are breathtaking moments.

END_OF_DOCUMENT_TOKEN_TO_BE_REPLACED

A little while into Baz Luhrmann’s Moulin Rouge is a moment when a portion of the audience decides they just can’t stick with a film this chaotic and assaulting.

The rest of us, who love the film, half agree with that assessment but manage to get caught up in the insanity just enough to make it through to the other side, where the true pleasures await.

That moment is the ‘Hindi San Diamonds’ scene.

END_OF_DOCUMENT_TOKEN_TO_BE_REPLACED

Moulin Rouge is one huge heaping mess of a film. At times it feels like a runaway train in danger of flying off the tracks into a fiery pileup. But somehow it keeps its balance and emerges as one of the most memorable films of the 00s.

Most of the credit, in my opinion, belongs to Ewan McGregor. I can’t imagine another actor pulling off the naive innocence and the unabashed romanticism of his Christian, let alone one with a terrific singing voice to match. Nicole Kidman got the Oscar nod for this film, but McGregor was its MVP.