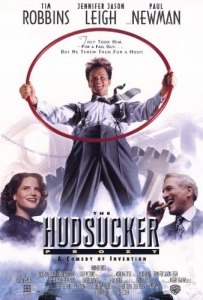 The Coens’ fifth film is a mash-up of their influences from 1940s Hollywood, including Preston Sturges, Howard Hawks and Frank Capra. It follows naive mailroom clerk Norville Barnes (winningly played by Tim Robbins) who is given the top job at massive Hudsucker Industries in a plot by the board of directors to tank the stock so they can buy it back cheap.

Rather than sinking the company, however, the nincompoop makes it even more successful when his idea for the hula hoop (“you know, for kids”) strikes a nerve. The hilarious sequence dramatizing the birth and popularization of the hula hoop is one of the most inspired in the Coens’ canon.

END_OF_DOCUMENT_TOKEN_TO_BE_REPLACED

Let me say right up front that I’ve never been able to properly digest a Coen Brothers movie after just one viewing. So anything I say about this one is probably just half of what I’ll think about it once I know it a little better. And I definitely look forward to knowing it better, so that says something right there.

Following their biggest commercial and critical success, the multiple Oscar-winning, violently bleak No Country For Old Men, the Coens have returned to another of their strengths, screwball comedy. But what struck me most about Burn After Reading is that it is as pessimistic about humanity — if not more so — than No Country.

(Minor spoilers follow, so read at your own risk)