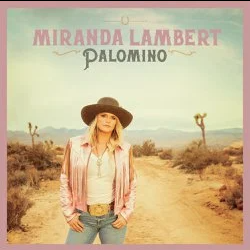 Friday, April 29, was akin to a national holiday here at Meet Me in Montauk, as it marked the release of a brand-new Miranda Lambert album.

Palomino is the country superstar’s ninth solo studio album, and her first since 2019’s Wildcard. Last year, she released The Marfa Tapes, a lo-fi collaboration with fellow singer-songwriters Jack Ingram and Jon Randall, an album that — like this one — was inspired by our COVID times.

A few years ago I declared that Lambert is my favorite musical artist, and certainly my favorite of those still actively recording. Palomino certainly isn’t going to change that opinion. It’s a typically excellent release from a woman who hasn’t taken a wrong step yet.

I’ve noticed many reviews of the album making a point to call out Lambert’s impressive consistency. List the first nine albums of any artist you can imagine and I bet you’ll find at least one weak spot. Or the records will fall into obvious tiers.

Not so for Lambert. I could make a good case for every one of her albums landing in the top three, which makes ranking all nine an absolute nightmare.

I’m sure not attempting that this week, but I’m doing something almost as pointless — ranking the songs on Palomino. Nothing on this record is worth skipping, but I’ll do my best to present them in order of my preference (based on a handful of listens).

This is a slow ballad offering up a tour of the lonely hearts at a neighborhood dive bar. On most of Palomino, Lambert tells other people’s stories, getting away from the confessional songwriting of recent albums. I gave this one my bottom slot because it’s pretty straight-forward musically, and it’s the sleepiest track on a mostly upbeat album.

An unlikely collaboration with the B-52’s, of all people, this is a rollicking party song complete with ‘Rock Lobster’-style callouts from Fred Schneider. This song will be a blast live, especially if Lambert can bring the Georgia New-Wavers with her.

Palomino‘s lone cover is this take on the title track from a Mick Jagger 1993 solo effort. I was going to describe this song with an adjective I used on the previous one, “unlikely,” but I guess by now it’s clear Lambert rarely does the obvious. ‘Wandering Spirit’ is a great choice for Palomino, thematically, because this is an album all about getting out on the open road, exploring new places, and doing all the things Lambert (and the rest of the world) were unable to do during lockdown.