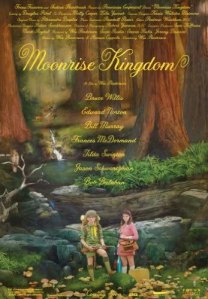 Revisiting all of Wes Anderson’s films in order didn’t result in shuffling my ranking very much. I’ve seen most of these movies many times, even if some of those viewings were years ago, so my opinions are pretty baked in.

The one major exception is 2012’s Moonrise Kingdom. Pre-pandemic, I hadn’t revisited this one since it first came out in theaters, and it sat near the bottom of my Anderson ranking. Well, now I’ve seen it three times in the past 18 months (including twice in the past week), and it’s moving close to the top.

Set in 1965 on the fictional New England island of New Penzance, Moonrise Kingdom depicts the budding romance between 12-year-old runaways Sam and Suzy, and the fallout of their disappearance on the flawed adults in their orbit.

I have no idea why this movie didn’t wow me the first time. I enjoyed and appreciated it (and placed it on my top ten of 2012) but it didn’t measure up to my favorites by Anderson. Now, I find it to be not only one of his most expertly crafted films but one of his most moving.

The performances by newcomers Jared Gilman and Kara Hayward are wonderful. Neither of these pre-teens had ever auditioned for a role before, let alone led a movie, and they are incredibly sweet, funny and raw.

Surrounding them is an ensemble cast featuring Anderson regulars Bill Murray and Jason Schwartzman, but also newcomers Bruce Willis, Ed Norton, Frances McDormand, Tilda Swinton and Harvey Keitel. All but Willis would go on to appear in Anderson’s next two films.

Norton is particularly winning as Khaki Scout Master Randy Ward, the earnest leader of the troop of adventuring lads from which Sam goes AWOL. Willis plays against type as the reserved Captain Sharp, the somber police chief charged with locating the children.

McDormand brings her usual gravitas to the role of Suzy’s mother, a woman who sees her own compromises and disappointments reflected in her daughter.

Moonrise Kingdom is about children, and has the whimsical spirit of a child’s adventure, but it is equally resonant as an exploration of adult disillusionment. The nostalgic charm of the film is all the more powerful viewed through that lens.

He always wore his Sunday feathers and held a tomahawk
The maiden wore her beads and braids and hoped someday he’d talk
Kaw-Liga, too stubborn to ever show a sign
Because his heart is made of knotty pine

Kaw-Liga was a lonely Indian, never went nowhere
His heart was set on the Indian maiden with the coal black hair
Kaw-Liga just stood there and never let it show
So she could never answer “yes” or “no”

And then one day, a wealthy customer bought the Indian maid
And took her, oh, so far away but old Kaw-Liga stayed
Kaw-Liga just stands there as lonely as can be
And wishes he was still an old pine tree