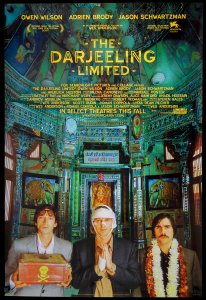 In 2007, Wes Anderson released the most divisive film in his catalog, The Darjeeling Limited. You’ll find this movie at the bottom of most fans’ rankings, yet it won a prize at the Venice Film Festival and earned twice its budget at the box office. It has the second lowest Rotten Tomatoes score among Anderson’s films but it hasn’t enjoyed the reassessment of The Life Aquatic, the only one below it.

As I wrote yesterday, almost all of Anderson’s movies deal with grief to some extent, but The Darjeeling Limited puts that theme front and center. The film follows a trio of brothers traveling on a train through India after a yearlong estrangement following the death of their father. They are weighed down with emotional (and physical) baggage and seeking a spiritual awakening.

Using India as the backdrop for the healing journey of three rich white guys is inherently problematic, and the film doesn’t try very hard to avoid that pitfall. The few non-white characters with speaking roles mostly exist to serve the character development of the brothers. The death of an Indian child is used as a plot device to bring the trio closer together.

At the same time, the ugly American behavior by the brothers feels very intentional. The Indian characters are mostly annoyed or amused by the intruders’ presence, and their lives are interrupted but unchanged. It’s a movie about three flawed, obtuse, privileged men, and probably pretty accurate in its depiction of their experience abroad.

The bigger question is, why make a movie about these three in the first place? Wes Anderson, like a lot of white, male filmmakers, is most comfortable writing about white men. In this movie, set in a real foreign country as opposed to the more invented settings of his previous films, that fact stands out in harsher context.

Those limitations aside, The Darjeeling Limited is beautifully designed and filmed. Much of the movie was shot on an actual moving train, and the camerawork and editing makes the most of the unique location. Anderson regulars Owen Wilson, Adrien Brody and Jason Schwartzman have great chemistry as the brothers and a late appearance by Anjelica Huston as their mother takes the film up a notch.

In fact, the last 20 minutes or so of this movie is strong enough to make up for a lot of its earlier shortcomings and send you out on a real high. Never underestimate the effectiveness of a slow-mo shot of somebody catching a train set to a Kinks song.

[Verse 4]
Now you’ve got some diamonds
And you will have some others
But you’d better watch your step, girl
Or start living with your mother