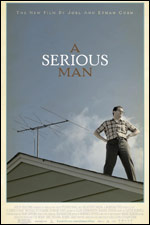 This is the Coen Brothers’ densest text, but it’s still an easy watch. Leave it to them to explore the existence of God and the purgatory of uncertainty and still deliver a film this funny.

A Serious Man asks if we’re victims of an indifferent god (as the next film on my list suggests), or if our moral actions have consequences. And can we ever know, or is the trick to let it pass, like a toothache?

Protagonist Larry Gopnik (a brilliant Michael Stuhlbarg) wrestles with these questions as his world falls down around him. He seeks answers, fruitlessly, from a series of rabbis, and suffers for both his actions and his inaction.

This is the Coens’ most emotional film, especially in tender scenes between Larry and his sad-sack brother (Richard Kind). It is also — at least in theory — their most personal, set in late-60s suburban Minnesota, a time and place matching the brothers’ own childhood.

Their depiction of Jewish rituals is lovingly filtered through the eyes of a 13-year-old boy becoming a bar mitzvah. He smokes a joint before the ceremony and his weed-addled perspective adds a level of mystery and majesty to the event.

I love those moments, which bring a dash of Coen absurdity to mundane suburban life. And I love the haunting uncertainty with which the film ends, as Larry and his son get a glimpse of the awesome power of — what? — God, Nature, bad luck, random chance? Does it matter? Does anything?

The only Coen Brothers film to win Best Picture at the Oscars, No Country for Old Men also took home trophies for Best Director, Best Adapted Screenplay and Best Supporting Actor. That’s really quite remarkable, given how little the movie’s sensibility resembles that of typical Oscar fare.

No Country is a gripping suspense film about a cat-and-mouse chase in which the cat and mouse never see each other, but it’s also a dark, sad morality tale about the relentlessness of evil and the beacons of righteousness who are hopelessly outmanned. Green Book it ain’t.

Whatever caused the Academy to go so off-brand, good for them. This movie shows the Coens at the top of their cinematic game, milking every scene for maximum effect in the most subtle way possible. I defy you to find a wasted shot in this film.

This is one of the best-cast movies of all time. Javier Bardem was widely celebrated for his chilling, nonchalant murderer Anton Chigurh, but for my money he gives the third best performance of the leads.

Josh Brolin fully inhabits Llewelyn Moss, painting a portrait of a smart, resourceful working man using his body and eyes in lieu of dialogue. And Tommy Lee Jones is weighed down by the weariness of a sheriff who has watched the world change for the worse — years of disappointments are etched into the lines on his face and cloud his sorrowful eyes.

In addition to the main roles (which also include Tess Harper, Woody Harrelson and Kelly Macdonald), every bit player is perfect. A gas station owner forced to bet his life on a coin toss is so well-drawn in a few minutes that it’s hard to believe he’s an actor at all. The Coens have always filled their movies with character actors who look and sound like “real” people and this film is the finest example.

No Country for Old Men can be a tough movie to watch, as it inevitably morphs from a story of a good guy beating the odds to a sad lament for a crumbling society, but it is also a grand work of entertainment. Few filmmakers can pull off a tightrope walk like this, and the Coens make it look easy.