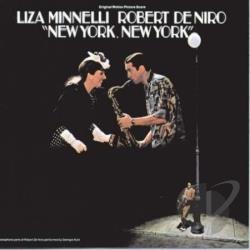 This week I’ll continue counting down my ten most surprising Oscar-snubbed songs, picking up with #5.

Here’s a song that probably lost its bid for an Oscar due to the dismal failure of the film in which it appears.

It did, however, feature an original song that went on to be a classic.

People who haven’t seen Scorsese’s film (and that’s most people, including me) certainly know the song that shares its title. I first heard ‘New York, New York’ performed by Frank Sinatra, who made it his own, but it remains a signature tune for Liza Minnelli as well.

And get a load of the collection of songs that bested it for an Oscar nod: ‘Candle On the Water’ from Pete’s Dragon; ‘You Light Up My Life’ from You Light Up My Life; ‘Someone’s Waiting For You’ from The Rescuers; ‘The Slipper and the Rose Waltz (He Danced with Me/She Danced with Me)’ from The Slipper and the Rose; and ‘Nobody Does it Better’ from The Spy Who Loved Me.

And the winner was… ‘You Light Up My Life.’ Fair enough, I guess. I would have gone with ‘Nobody Does It Better’ in a landslide. But how could ‘New York, New York’ not crack that list? Has anybody even heard of the other three?

Start spreading the news
I am leaving today
I want to be a part of it
New York, New York

These vagabond shoes
Are longing to stray
Right through the very heart of it
New York, New York

If I can make it there
I’ll make it anywhere
It’s up to you
New York, New York

New York, New York
I want to wake up
in a city that never sleeps
And find I’m a number one, top of the list
King of the hill
A number one