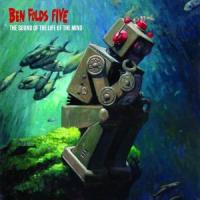 As my recent list of top 20 albums of the decade so far was wrapping up, my brother-in-law asked me if I’d forgotten to consider Ben Folds Five’s The Sound of the Life of the Mind.

For a moment, I thought I had. So I went back to my notes to see exactly how things shook out.

Turns out the album was in the 21st spot, bumped out of the countdown when I decided to make a space for Adele’s 21, which I had forgotten when first compiling the list.

Then I remembered why this record, along with others I’ll feature this week, failed to make the cut.

I wanted to avoid picking albums simply for being a batch of new songs by a favorite artist. I deliberately left off records by some of my very favorite musicians for that reason.

Years ago I was on a listserv for Elvis Costello fans. It was a large and diverse group of knowledgeable music lovers. In fact, it was through this listserv that I first learned about Ben Folds Five, along with many other great artists.

In 1998, the group conducted a poll of the year’s best albums. Every member submitted a top ten list, with each title weighted and combined into a master list.

The resulting top ten was a fine list, reflecting the great taste of the group’s members. Lucinda Williams’ Car Wheels on a Gravel Road showed up high, as did albums by Beck, Belle and Sebastian and Lauryn Hill.

But sitting in the #1 spot was Elvis Costello’s collaboration with Burt Bacharach, Painted From Memory. An interesting experiment, to be sure, but the best album of 1998? Not by any stretch of the imagination.

But clearly a group of Elvis Costello fans had each given him a spot on their personal top ten lists, allowing him to amass enough total points to dominate the compiled results. They might have even been afraid to leave him off of their submissions given the audience.

That’s what I had in mind when I opted not to include The Sound of the Life of the Mind on my top 20. I didn’t want it to make the cut because it was a Ben Folds Five record. Folds’ collaboration with Nick Hornby, Lonely Avenue, showed up high on the list because of its unique nature and the strength of its songs.

The Sound of the Life of the Mind, on the other hand, is a pretty damn good Ben Folds Five album, but maybe that’s all it is. For a Ben Folds Five lover, that’s plenty. But I wanted to remove that hat while making the list.

Of course, listening to today’s SOTD, one of my favorites from the record, has me reconsidering the choice.

Sometimes a phrase or a manner that’s you
Comes through me, it goes in a flash
It’s a frame, it’s a blink like life
Oh and how much now should we pay for the past
Cause you could age with grace if I freed you in my mind

Cause it’s not about you, not you, anymore
It’s about what I’d do with it all
And I, I’ll never let you let me down

This morning I wake to be older than you were
Fresh white snow for miles, every footstep would be mine