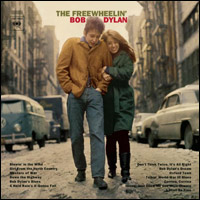 There are many potential ways to go about these Dylan weekends. I could present the songs randomly, thematically, chronologically, alphabetically… you name it. In order to lend some organization to the process, I’ve decided to highlight, in pairs, tracks from my favorite Dylan albums according to order of release.

I won’t cover every one of his albums — his work from the mid-70s to the mid-80s is better left forgotten — and I’ll restrict myself to the studio albums, leaving the bootleg records (worthy of a series all their own) aside for the time being. But that still gives me close to 20 albums to work with, encompassing one of the most extraordinary careers in the business.

The Freewheelin’ Bob Dylan, released in 1963, was Dylan’s first album of original material and remains one of his best. This is one of six Dylan albums I consider his pinnacle achievements. It’s funny that I can’t narrow that list down to fewer than six, but there you have it.

‘Blowin’ in the Wind’ is certainly the best-known track from Freewheelin’ but ‘Girl From the North Country’ is a close second. As he would throughout his career, Dylan drew inspiration from an old folk song, incorporating the “remember me to one who lives there” line from ‘Scarborough Fair.’

The thing that strikes me about a song like this, so world-weary and lovelorn, is that Dylan wrote it when he was 22 years old. Was he that much of an old soul at so early an age, or just that good at pretending?

Well, if you’re travelin’ in the north country fair,
Where the winds hit heavy on the borderline,
Remember me to one who lives there.
She once was a true love of mine.

Well, if you go when the snowflakes storm,
When the rivers freeze and summer ends,
Please see she has a coat so warm,
To keep her from the howlin’ winds.

I’m a-wonderin’ if she remembers me at all.
Many times I’ve often prayed
In the darkness of my night,
In the brightness of my day.

So if you’re travelin’ in the north country fair,
Where the winds hit heavy on the borderline,
Remember me to one who lives there.
She once was a true love of mine.