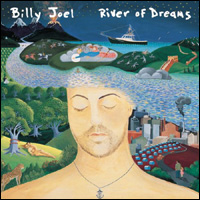 Looking at the numbers makes Billy Joel’s “retirement” all the more impressive. He truly went out at the top of his game, with River of Dreams selling more than 5 million copies and vying for an Album of the Year Grammy. To just hang it up after a success like that takes some guts.

When this album came out (in 1993), Alex and I went to the store and each bought a copy of the CD. This was in the days before iPods and easy CD burning, and several years before we’d get married and merge our CD collections. It’s hard to believe it’s been 16 years since I last purchased a Billy Joel album.

Listening to the whole album this week for the first time in years, it struck me as much stronger than I remembered it, though I’m a little turned off by the obvious lyrics of ‘2000 Years’ (“Why can’t we learn from all we’ve been through after two thousand years?”) and ‘No Man’s Land’ (“I see these children with their boredom and their vacant stares / God help us all if we’re to blame for their unanswered prayers”). Why is it that artists feel the need to reflect so directly on the state of the world as they get older? Those words sound like something the “angry young man” would have said before he gave up on his righteous rage.

But other tracks, such as ‘Blonde Over Blue,’ ‘A Minor Variation,’ ‘The Great Wall of China,’ ‘River of Dreams’ and ‘Famous Last Words’ have held up very well. ‘River of Dreams’ was a big hit that risks being overly sentimental but winds up sublime. And I love this little one-liner: “I’m not sure about a life after this / God knows I’ve never been a spiritual man.”

Listening to ‘Famous Last Words,’ the album’s final track and the last proper song Joel ever released, it seems as if he knew exactly what the future held in store… that he’d be cashing in his chips and getting out of the songwriting business:

But the centerpiece of the album, and its strongest moment, is ‘Lullabye (Good Night, My Angel),’ which drifts sweetly into the title track. ‘Lullaby’ is a gorgeous and simple piano ballad written for his daughter, Alexa Ray. It’s hard to hear (or even read) without getting a lump in your throat… it’s one of the finest things he’s ever written.

Goodnight, my angel
Time to close your eyes
And save these questions for another day
I think I know what you’ve been asking me
I think you know what I’ve been trying to say
I promised I would never leave you
And you should always know
Wherever you may go
No matter where you are
I never will be far away

Goodnight, my angel
Now it’s time to sleep
And still so many things I want to say
Remember all the songs you sang for me
When we went sailing on an emerald bay
And like a boat out on the ocean
I’m rocking you to sleep
The water’s dark and deep
Inside this ancient heart
You’ll always be a part of me

Goodnight, my angel
Now it’s time to dream
And dream how wonderful your life will be
Someday your child may cry
And if you sing this lullabye
Then in your heart
There will always be a part of me