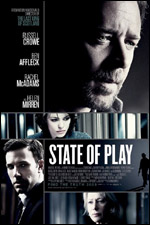 It’s always strange to watch a film set in a place or milieu with which you have intimate familiarity. I remember seeing the Kevin Costner thriller No Way Out when I lived outside of Washington D.C. and the whole crowd murmuring when he hopped on a non-existent Georgetown Metro stop.

State of Play gave me that feeling in spades, as it’s set in a newsroom and deals with the struggling newspaper industry and the locking of horns between print and digital media — all things I deal with on a daily basis. So it’s full of scenes that ring true (the sloppy desk of Russell Crowe’s seasoned reporter character, the cartoony redesigns being forced on the paper by a corporation focused only on the bottom line) as well as scenes that are laughably false (a blockbuster story appears to go from the reporter’s typewriter to the front page without intervention by an editor or a lawyer, the Web department in a modern newsroom is confined to a handful of people in a side room marked with a sheet of typewriter paper).

At one point in the film, Crowe visits a coroner’s office and it occurred to me that coroners all over the country were probably nit-picking the hell out of that scene while the rest of us accepted it as entirely realistic. We can’t forget that a movie’s mission is to entertain and, if you’re lucky, make you think… if you want realism, watch a documentary.

On the whole, State of Play gets the spirit of newspaper journalism right even if some of the details are more movie life than real life. The film’s heart is definitely in the right place, so I can forgive screenplay flourishes such as an overly written speech toward the end about how people still want to find hard news on their doorstep. Yeah, it feels written, but it’s nice to hear it said. And the end credit sequence, depicting the layout, printing and delivery of a daily newspaper, is downright poignant in light of papers closing across the country.

All this talk about newspaper and I haven’t even described the film’s plot, which involves a few seemingly unrelated deaths (including that of a beautiful young aid to a crusading congressman) and two reporters’ increasingly perilous efforts to put the puzzle together. It’s a satisfyingly twisty affair (co-written by Duplicity and Michael Clayton scribe Tony Gilroy) that makes good use of both the drama of a meaty investigation and traditional suspense film tactics.

The acting is great across the board. I always love Crowe in these frumpy roles… his movie star presence still shining through the extra pounds and shaggy hair. Rachel McAdams is just right as the new-school blogger caught up in her first big story. I really wish she’d do more movies (and I can’t wait to see her in The Time-Traveler’s Wife this summer). Helen Mirren brings grit and class to the role of The Washington Globe‘s frustrated editor. And Ben Affleck, so often maligned by people who don’t actually pay attention to his performances, is excellent as the congressman caught up in a conspiracy complicated by his own involvement with the dead girl.

Special mention must be made of Jason Bateman, who gives the film a late burst of energy as a slimeball PR guy who knows too much. Bateman is quite possibly my favorite actor working in TV and movies today and I can’t think of a film he’s appeared in that wasn’t instantly elevated by his performance.

2 thoughts on “State of Play”