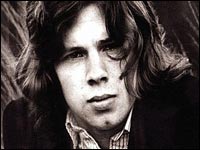 I was a little ashamed of not knowing who the hell Nick Drake was before he turned up in a car ad, but glad nonetheless to finally get on the bandwagon. I definitely saw the comparisons to one of my favorite artists, Elliott Smith (even before Smith completed the connection by dying early).

‘Pink Moon’ (the song) is absurdly lovely, but I found myself far more taken with another track, ‘Things Behind the Sun.’ Like everything on the album, it’s a plaintive and pretty acoustic guitar track with haunted, whispered vocals about turning away from material things (and people).

Please beware of them that stare
They’ll only smile to see you wile
Your time away
And once you’ve seen what they have been
To win the earth just won’t seem worth
Your night or your day
Who’ll hear what I say?

What I really love about this song is its restraint. Drake has a killer chorus here, and he must have been tempted to sing that sucker fifteen times. But instead he sings it the first time and then, after the second verse, just sort of hints at it on his guitar. He returns to it after the third verse then ends the song. Can you imagine Bono, say, singing the chorus to ‘Pride (In the Name of Love)’ just twice?