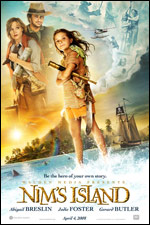 First, I must comment on the very sad fact that Muvico has switched to Pepsi. I can’t imagine such a fine establishment serving such swill. It’s like the Four Seasons giving you a wine list populated entirely with Ripple. This will pose a problem for Alex and me, because a nice cold Coke is an important part of any moviegoing experience. I see much smuggling in our future.

On to the movie. I went with Sophia, which is always special. She sat on my lap, we shared a box of Milk Duds and she whispered observations in my ear throughout. Good times.

The movie itself is rather odd — a blend of slapstick humor, melodrama and genuine emotion. I had trouble with the basic premise right off the bat, though. Nim is a girl (maybe 12 years old) who lives (and has lived for as long as she remembers) on a remote island in the South Pacific with her marine biologist father and a bunch of animals. This immediately struck me as a borderline case of child abuse. How cruel to raise a child without the company of other children (or anybody else, for that matter)! And how long will this go on? Will she remain there through her teens? Her twenties? At one point, Nim runs into a child of her age (when a cruise ship happens upon the island) and it’s as if she’s had an alien encounter. Very strange.

Apart from that, though, it’s a sweet film. Jodie Foster takes on a very light-hearted role for a change and does some great physical comedy as the agoraphobic adventure novelist. She also delivers in a very touching scene toward the end of the film. Abigail Breslin brings the same real-girl charm she was lauded for in Little Miss Sunshine. Gerard Butler is a long way from 300 as the stranded dad, and I was touched by his determination to get back to Nim.

Sophia seemed to enjoy it, though she was full of questions like “Where does she get her clothes?” Her first reaction after the lights came up: “I liked the seal.”

One thought on “Nim’s Island”