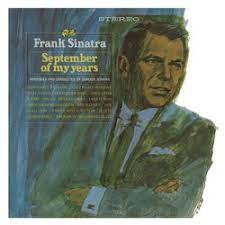 The Random iTunes Fairy is looking ahead to my 50th birthday this December and serving up a track from Frank Sinatra’s 1965 album September of My Years. Sinatra released this album in August of that year, ahead of his own 50th birthday that December. A nifty coincidence.

END_OF_DOCUMENT_TOKEN_TO_BE_REPLACED

September of My Years is a 1966 concept album by Frank Sinatra, exploring the existential angst of middle age. Sinatra won one of his three Album of the Year Grammys for this record.

When I was a kid, hearing September of My Years along with so many other Sinatra classics, I always thought of this as an old man’s album. As in, the final thoughts of a man on his death bed, looking back on a long and eventful life.

END_OF_DOCUMENT_TOKEN_TO_BE_REPLACED 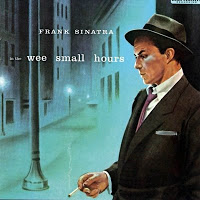 ‘What is This Thing Called Love?’ is a Cole Porter tune written for the 1929 musical Wake Up and Dream. It was first performed by Elsie Carlisle, and you can listen to that version here.

The song has been recorded by plenty of artists over the years, and was particularly popular with jazz musicians in the 30s, in versions both fast and slow. Billie Holiday put her indelible stamp on it in the 40s.

END_OF_DOCUMENT_TOKEN_TO_BE_REPLACED

In recent months, I’ve found myself declaring a couple of times that one song or another was officially among my all-time favorites.

That got me interested, during these pandemic times, in creating a definitive playlist of my favorite songs. This is an exercise fraught with peril and subject to repeated second-guessing, but that’s also what makes it fun.

Narrowing such a list to ten songs proved impossible, so I kept at it until I had close to 30, then pared back to 25, which feels like a good number.

END_OF_DOCUMENT_TOKEN_TO_BE_REPLACED

Frank Sinatra fared well in my rankings, with his two AFI-recognized films placing at #11 (On the Town) and now #8. Sinatra’s film career is almost as impressive as his singing career, with multiple comedic and dramatic roles, an Academy Award (for 1953’s From Here to Eternity), several films as a producer and one as a director.

Sinatra is a treat in Guys and Dolls, but it’s his co-star Marlon Brando who really made this film for me. Brando as a song-and-dance man is not something I expected to encounter during this project.

END_OF_DOCUMENT_TOKEN_TO_BE_REPLACED

Join 149 other followers
Meet Me In Montauk
Loading Comments...