I’ve featured nine critically-acclaimed albums from the year 2000, with decidedly mixed results, so I figured I’d throw a bone to the most commercially successful album of that year, NSYNC’s No Strings Attached.

This was not just the best-selling album of 2000, but a record-holder for best first week’s sales (2.4 million) for 15 years, until Adele’s 25 obliterated that mark by nearly a million copies.

END_OF_DOCUMENT_TOKEN_TO_BE_REPLACED

D’Angelo, 44, is one of the most celebrated R&B artists of his generation, despite having released only three albums over two decades.

The Richmond-born singer-songwriter released his debut album, Brown Sugar, in 1995 at the age of 21. After a five-year hiatus, he dropped Voodoo, one of 2000’s most acclaimed albums. He didn’t surface again until 2014, when Black Messiah made a huge comeback splash.

END_OF_DOCUMENT_TOKEN_TO_BE_REPLACED 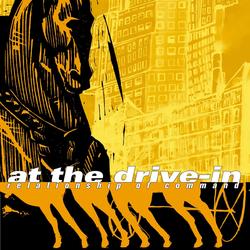 Texas “post-hardcore” band At the Drive-In formed in 1994 and released three albums before splitting in 2001. The third of those, 2000’s Relationship of Command, received widespread critical acclaim and is considered one of the best examples of its genre.

I call bullshit. I couldn’t make it through half of any of the songs from this album that I sampled. Do critics and fans out there really find value in this stuff? I guess I’m just wired differently.

END_OF_DOCUMENT_TOKEN_TO_BE_REPLACED

After all the electronica and ambient pop, it’s nice to get back to a straightforward alternative rock album. My next critically-acclaimed record from the year 2000 is PJ Harvey’s Stories From The City, Stories From The Sea.

This was the English singer-songwriter’s seventh album and remains her most successful commercially and critically. It was nominated for multiple Grammys and won the coveted Mercury Prize, given to the United Kingdom’s best album.

END_OF_DOCUMENT_TOKEN_TO_BE_REPLACED

Critics in 2000 fell for some pretty weird shit. Maybe it was a reaction to the boy band explosion, but many of the albums I’m digging up that were critically acclaimed that year seem like an overcorrection, a deliberate attempt to celebrate the unconventional.

Case in point: The Avalanches, an Australian electronic band, whose album Since I Left You shows up on scores of critics’ year-end lists.