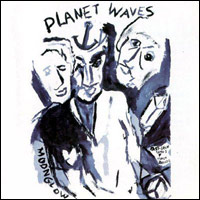 Planet Waves definitely falls closer to the Blood on the Tracks side of that continuum, even if it doesn’t come close to the heights of that classic. Its songs are thoughtful meditations on love and death with rich backing music provided by The Band, and it fits nicely just below the top tier of Dylan albums.

The best-known track here is ‘Forever Young,’ written for his kids, while other songs touch on the failed marriage that would also memorably inspire so much of Blood on the Tracks.

[Verse 3]
I been hanging on threads
I have been playing’ it straight
Now, I’ve just got to cut loose
Before it gets late
So I’m going
I’m going
I’m gone

[Verse 4]
Grandma said, “Boy, go and follow your heart
And you’ll be fine at the end of the line
All that’s gold isn’t meant to shine
Don’t you and your one true love ever part”

[Verse 5]
I been walking the road
I been living on the edge
Now, I’ve just got to go
Before I get to the ledge
So I’m going
I’m just going
I’m gone