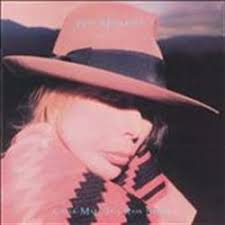 A benefit of Joni Mitchell slowing down her album pace from one per year to one every three years is that she managed to release only three records in the 80s.

The third and final of these, 1988’s Chalk Mark in a Rain Storm, closed out the decade on a slightly higher note than its two predecessors, but it is still a far cry from the heights of the early 70s. This is a decade best forgotten, with output only a superfan could love.

Mitchell has been a pioneer in many ways, and here she has one of the earliest examples of an album filled with “features,” as we say today. Chalk Mark in a Rain Storm boasts guest appearances by Peter Gabriel, Billy Idol, Tom Petty, Don Henley, Willie Nelson, and Wendy and Lisa.

Unfortunately, most of those cameos are wasted in small parts or weak songs. Gabriel is the exception, with opening track ‘My Secret Place’ making nice use of his voice as a counterpart to hers.

The album as a whole takes some inspiration from Gabriel’s So, especially in its production and the use of percussion, but doesn’t work nearly as well.

Fans who have little good to say about Mitchell’s 80s albums have suggested the 90s marked a return to form. I’m looking forward to that, because after eight straight winners, the last five albums have been a slog.

I was born and raised
In New York City
I’m just getting used to Colorado
Oh street bravado
Carry me
Why did you bring me to
A place so wild and pretty?
Are there pigeons in this park
Muggers after dark
In these golden trees
In the secret place?

Once I saw a film
In New York City
That was shot in Colorado
Girl meets desperado
In the trembling mountain trees
Out of all of the girls that you see
In bleachers and cafe windows
Sitting flirting with someone
Looking to have some fun
Why did you pick me?
For the secret place