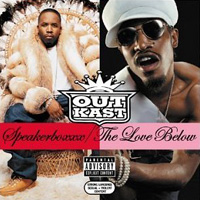 I’m continuing my Decades series over the next two weeks, writing about some of the 2003 albums that didn’t crack my top ten. Most of these records are completely new to me. A few are in my music library but neglected enough that I’m treating them as new.

Outkast’s Speakerboxxx/The Love Below falls into the latter category. I know the big songs from this album very well (‘Hey Ya,’ ‘The Rooster,’ ‘The Way You Move‘) but the rest haven’t stuck with me. And listening to it again this week, that didn’t really change.

While billed as an Outkast album, this double record was actually two solo albums by the band’s members Big Boi and Andre 3000. Big Boi turned in the Southern rap Speakerboxxx while Andre 3000 delivered the Prince-influenced art-soul of The Love Below.

Playing to the strengths of both men, the album was a critical smash, placing on top of the Village Voice Pazz & Jop poll and winning the Grammy for Album of the Year. Commercially, it debuted at #1 on the Billboard 200 and spent more than a year on that chart, eventually going 11X Platinum.

I prefer the more traditional first disc by Big Boi. While I admire the creativity and risk-taking of Andre 3000, his songs don’t really do it for me (with the notable exception of ‘Hey Ya’). But Big Boi’s Atlanta funk (including today’s SOTD) is a blast.

[Verse 1: Big Boi]
Step into the realms of space where nobody goes
Only the baddest motherfuckers are the ones that are chose!
Some of the coolest individuals on the planet we said
Best believe that we can buck or give a damn if we care!
No collision supervision but my family is here
Now my mama taught my niggas that was under the stairs
One of those who chauffeured life and then was underprepared
But my hunger is the thunder, no wonder it can’t be smothered
Or buttered up, buttercup, melt your sauce
You a Chuck E. Cheese bouncer chumpin’ off the boss
What I’m trying to tell you now is that you’re softer than soft
And I’m sick as a cough, did I mention it’s raw?
Your predicaments flawed, flaw means fucked up
And serving out the oven not fried, slow roast
No coast, tuck your tail and hide!
You scared?

[Verse 2: Killer Mike]
I officially do it with duns on tour
We lock down traps, push caps galore
My wiz cook work ’til it scale like fish
My old earth even known to handle biz
I serve whipped, out of whips, whip out cash
Usually keep a G-pack on the dash
Try to test my gangsta, I bring harm
I’m as slick as Freeway Rick and Nicholas Barnes
My Uptown Nikes hold caps and cheddar
My waistline hold a 4-pound Beretta
I’ll shoelace your face just to learn you better
My ox so sharp it cut through leather
My rap name Killer, my street name Skunk
I mastered the music that was born in the Bronx!
I switch my slang spit from my mouth
I’m still all coast, my coast the South!!!