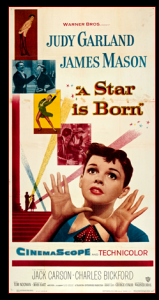 This project has given me my first real exposure to Judy Garland, and I’ve come away as fascinated and impressed as fans the world over have been for years. Garland stars in three films on this list, spanning her whole turbulent film career.

A Star is Born, directed by George Cukor (who also helmed a film still to come), was considered Garland’s comeback film at the ripe old age of 32. It was also one of the last movies she ever made.

Four years earlier, Garland split with MGM after a tumultuous 15-year stint that included substance abuse, depression, many creative differences, and a half-hearted suicide attempt. This remake of the 1937 A Star is Born marked her return to the big screen.

And quite a return it was! This movie is a showcase for one of the great diva performances of all time. I don’t know if Garland is good in this movie, exactly, but she sure as shit throws everything she has into every scene.

I watched the 1983 restoration, considered the closest thing to Cukor’s director’s cut you can find. After the film premiered, Warner Brothers cut out more than 30 minutes, concerned that the excessive runtime would limit the number of showings per day. The restoration runs a hair under three hours and includes still photos paired with the original dialogue in a few scenes for which the original footage has been lost.

Both the theatrical release and the restoration include the 20+ minute ‘Born in a Trunk’ sequence, basically a film within the film, in which Garland’s character reenacts her path to stardom through a series of musical numbers. It’s an impressive feat of musical theater, but it stops the film dead in its tracks.

For better and worse, A Star is Born is full of flourishes like that, opportunities for Garland to fill the screen with her larger-than-life personality. Her scenery-chewing performance was considered a favorite for that year’s Best Actress Oscar, but she wound up losing to Grace Kelly for The Country Girl.

I haven’t mentioned James Mason, who plays the spiraling alcoholic actor Norman Maine with sad charm. Mason nabbed a Best Actor nomination, the second of six total for the film (Art Direction, Costume Design, Score and Song were the others). Interestingly, all four versions of A Star is Born received at least four Oscar nominations.

Good riddance, good-bye
Every trick of his you’re on to
But fools will be fools
And where’s he gone to

The man that got away