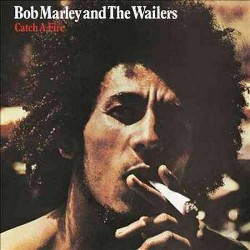 Bob Marley and the Wailers’ 1973 album Catch a Fire was their fifth, but it feels like a starting point. It was their first album with the Island label, and the first to have the distinctive instrumentation and production with which casual fans are familiar.

If you’ve owned and loved the classic Legend collection, those songs started here.

On Catch a Fire, Marley explored political topics on songs such as ‘Slave Driver’ and today’s track, ‘Concrete Jungle,’ which paints the urban black experience as just a step above slavery. But the album also featured one of Marley’s classic love songs, ‘Stir It Up.’

Wailer Peter Tosh wrote and sang lead vocals on two tracks. Later this year, he was in a car accident that killed his girlfriend and left him with a fractured skull. He left the band the following year to embark on a solo career. In 1987, he was tortured, shot and killed during a robbery.

Things didn’t turn out so great for Bob Marley, either.