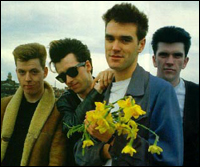 One guess which musical genome category The Smiths fall into. That’s right, boys and girls, we have another ‘Melancholy’ sighting!

I can also make a strong case for the ‘Pure Pop’ category. Those who are only passingly familiar with the band’s discography might associate them only with self-pitying mope rock and remain unaware of guitarist Johnny Marr’s peerless knack for shimmering pop hooks.

Still, those sugar-high guitar riffs and Morrissey’s dark sense of humor generally served as ironic counterpoints to the chasm of adolescent sadness at the core of The Smiths’ four albums and many singles.

This is music made for wallowing, and those of us lucky enough to have wallowed in it know how meaningful that can be, haters be damned.

(On an unrelated note, I discovered on YouTube a lovely live recording of Jeff Buckley singing today’s SOTD.)