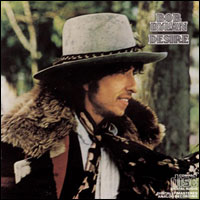 I’ve referenced my Dylan Six — the six albums I consider his unqualified masterpieces — many times over the past few months. And I’ve named five of them already: The Freewheelin’ Bob Dylan, Bringing it all Back Home, Highway 61 Revisited, Blonde on Blonde and Blood On the Tracks.

1976’s Desire is not the sixth. But I adore this album and I’m tempted to expand that list to a Dylan Seven just to sneak it in there. It’s one of the most musically adventurous and lyrically compelling releases of Dylan’s career and contains a few songs I count among my very favorites.

Desire was the first album of newly recorded material since Blood On the Tracks, which was released just a year earlier. In between, The Basement Tapes had finally made it to the shelves, making the period between January 1975 and January 1976 one of the most incredible years any recording artist has ever had.

For those who thought Dylan had declined post-Blonde On Blonde and John Wesley Harding, these albums served as a powerful rebuttal.

Desire stands out as one of the only albums where Dylan worked extensively with a collaborator. He teamed up with writer/psychologist Jacques Levy on seven of the album’s nine tracks. Interestingly, Levy’s contributions were to the songs’ lyrics, an area you’d think the verbose Dylan would require no help.

As it happens, my two favorite songs on Desire are the two Dylan wrote on his own. ‘One More Cup of Coffee (Valley Below)’ comes first on the album and it’s a splendid showcase for the overall sound of this record. The lush atmosphere created by the bass, drums and especially violin form a perfect backdrop for one of Dylan’s finest vocal performances. A then-unknown Emmylou Harris provides backing vocals (something she went on to do with great success for countless others).

I either read or was told once that, following the release of Desire, a young man killed both of his parents while listening to today’s SOTD and sprinkled coffee grounds on their dead bodies. I’ve always believed that to a be a true story until I came across no mention of the incident in reading up on the song today. Not one mention anywhere on the Web that I could find.

So now I’m perplexed. Where on earth did I hear this apparently completely fictitious story, and what was the motive of the twisted but inventive person who told it? If anybody out there can shed some light on this mystery, please do so.

Your breath is sweet
Your eyes are like two jewels in the sky.
Your back is straight, your hair is smooth.
On the pillow where you lie.
But I don’t sense affection
No gratitude or love
Your loyalty is not to me
But to the stars above.

Your daddy he’s an outlaw
And a wanderer by trade
He’ll teach you how to pick and choose
And how to throw the blade.
He oversees his kingdom
So no stranger does intrude
His voice it trembles as he calls out
For another plate of food.

Your sister sees the future
Like your mama and yourself.
You’ve never learned to read or write
There’s no books upon your shelf.
And your pleasure knows no limits
Your voice is like a meadowlark
But your heart is like an ocean
Mysterious and dark.