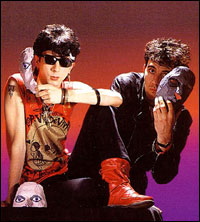 Here’s an example of an 80s song that didn’t make much of an impression on me at the time of release (after all, I was only 9 in 1981 when it came out) but has muscled its way into my brain as a quintessential 80s song in the years since. ‘Tainted Love’ so typifies that 80s sound that, coming out as early as ’81, I suppose it really should be credited with creating that sound.

And that makes it all the more surprising that this is actually a cover of a 1964 song recorded by Gloria Jones. I had no idea this song wasn’t an original. Somehow that takes away from what Soft Cell accomplished. I mean, doesn’t that make them even less than a one-hit wonder? Sort of a half-hit wonder? I don’t know, maybe not. Here’s the Gloria Jones version if you’d like to compare.

I suppose if this whole 80s thing is about sound and production less than the actual structure of the songs then Soft Cell deserves full credit. While Jones’ version is close to Soft Cell’s in pace and melody there’s no confusing the decades each was recorded. And if you want to hear a song from the new millennium sampling ‘Tainted Love,’ check out Rihanna’s ‘S.O.S.’ Good lord, I could check that video out all day (and no, I don’t just like Rihanna for her looks!).

Speaking of videos, the Soft Cell one is rather odd, with half-invisible star people molesting a man in his bed. And is it my imagination, or were there far more obviously gay singers back then?