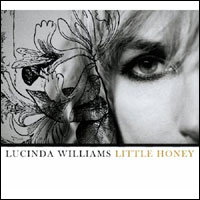 Sadly, the draconian Warner Music Group decision to pull all their content from YouTube has forced me to skip over Lucinda Williams’ next two albums — World Without Tears and West — and straight to her latest release, Little Honey. I really hope WMG pulls its head out of its ass and realizes that they’re doing nothing but losing free advertising and generating a lot of ill will.

World Without Tears came just two years after Essence and was Williams’ most ambitious record yet. She rocked harder than ever on the album and explored talking blues (bordering on rap) on a couple of tunes. She also delivered her rawest lyrics yet… miles away from the sweet acoustic love songs of 20+ years earlier.

Take ‘Minneapolis,’ a song I believe describes the emotional turmoil stemming back to a rape.

I can always trace it back
To that night in Minneapolis
Here on the seventh floor in a room I can’t call mine
Deadbolt on the door, do not disturb sign
Shaking and trembling
On the clean white linen
Slivers of starlight across the ceiling

Yikes. No more passionate kisses for this gal. Most of the album covers this same aching territory and it’s not always an easy listen. The songcraft is as good as ever but it’s an album better appreciated than loved.

Up next, after a four-year break, was West, an album that I do love despite a few flaws. It’s similar in sound to her earlier albums though with a more polished sheen. Williams deals with the loss of her mother in a couple of songs on this record, including ‘Fancy Funeral,’ in which she dismisses the calls by family members to make extravagant funeral arrangements:

West contains a couple of clunkers (the 9-minute ‘Wrap My Head Around That’ front and center) but it also contains some of Williams’ most effective songs, including ‘Everything Has Changed,’ ‘Learning How to Live’ and ‘Where is My Love?’ (which wins more points by mentioning a favorite town of mine):

Is my love in Gainesville
Pretty, radiant and warm
Drinkin’ whiskey ’til he’s had his fill
Inspired by a summer storm?

Williams’ next (and most recent) album came out just a year after West — the shortest span between records in her career. Little Honey is her strongest work since Car Wheels on a Gravel Road. I reviewed the album last year, so I won’t bother repeating myself here.

‘Little Rock Star’ is one of my favorite tracks on Little Honey. It’s a plea for the redemption of Pete Doherty or Amy Winehouse or any number of talented but self-destructive musicians who seem hell-bent on dying young.

Hey little rock star
Why don’t you see
This is not all that it’s cracked up to be?
And I can’t say I blame you
For throwing the towel in
For buying more fame
By cashing your chips in
With all of your talent
And so much to gain
To toss it away like this
Would be such a shame

Juvenile delinquent, misunderstood
Peter Pan and Robin Hood
Will you ever do the things you’re afraid to do?
Will you ever know happiness, little rock star?
Or is your death wish stronger than you are?
Will you go up in flames like the torches that are carried for you?