The Road to Ensenada, Lovett’s best album, came out in 1996. In the 19 years since, he’s put out five studio albums, three of which consisted mostly of covers. The other two were pale imitations of the great albums he released during the first decade of his career.

END_OF_DOCUMENT_TOKEN_TO_BE_REPLACED

Lovett stopped making albums of strong original material more than 20 years ago. His last great record, The Road to Ensenada, came out in 1992. That’s just crazy.

Since then he’s been content to play covers and a few lazy originals, apparently content to run out his record contract with half-hearted effort.

END_OF_DOCUMENT_TOKEN_TO_BE_REPLACED 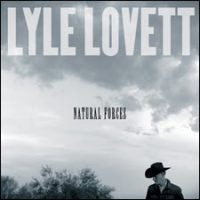 When I wrapped up my recent Lyle Lovett theme weeks, I held out hope that he would break out of the slump he’d been in for the past dozen years or so. His last album, It’s Not Big It’s Large, was a step in the right direction — a bit slight, but featuring stronger material than he’d released in years. I figured his next turn at bat would be major.

Natural Forces is another stop-gap Lyle Lovett album, enjoyable enough for what it is but a shadow of the man’s best work. It contains only four original songs and most of those aren’t even as good as the covers that make up the rest of the album. It’s a pleasure, as always, to hear Lovett and his peerless band perform but it’s a fleeting pleasure when what you really want is the next Road to Ensenada or Joshua Judges Ruth.